It might be hard for even their coaches to tell them apart, but Luo Ying and Luo Yu believe their physical similarity is one of their biggest assets against opponents.

The identical twins qualified for the BWF Destination Dubai World Superseries Finals on the back of consistent performances in the season. Although they couldn’t win a Superseries, they were runners-up at the Korea Open, semi-finalists in Singapore, Australia, Paris and Hong Kong, besides winning the Badminton Asia Championships and the China Masters Grand Prix Gold.

“It’s a big advantage that we’re identical twins,” said Luo Ying, the older of the two by 15 minutes. 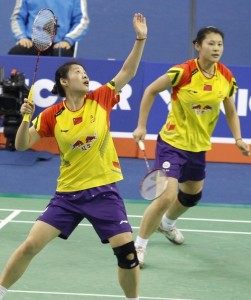 “Our opponents get confused – psychologically, it’s a big advantage for us as they cannot plan against us individually. Even our teammates and coaches cannot tell us apart sometimes.”

The twins have enjoyed a meteoric rise. Ranked 55 in December 2013, they have shot up to world No.3.

“China has strong Women’s Doubles pairs, and that inspires us to do well. There’s a lot of pressure too, because we have accomplished pairs and it is hard to match their achievements. For instance, Zhao Yunlei is very hard to beat at the net, while Tian Qing has a strong game overall. The circuit is tough but we don’t want to be second best.”

The duo was introduced to badminton after Luo Yu was identified by a coach in kindergarten and he then discovered she had a twin. They count each other as best friends, but say their personalities are different.

“I’m much more of an extrovert,” says Luo Yu. “I’d rather go outdoors and spend time with friends, but my sister is an introvert who spends most of her free time at home. Of course we consider each other our best friends because we have a natural bond.”