The Asian Games gold medallist, who lost her first match to Japan’s Akane Yamaguchi yesterday, looked a shadow of herself during her 21-12 11-8 rout by Chinese Taipei’s Tai Tzu Ying in the Women’s Singles Group B encounter. The result added to China’s woes in Women’s Singles after top seed Wang Shixian lost her second straight match earlier in the day. 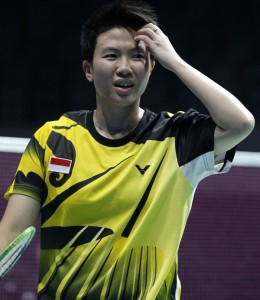 Meanwhile, Japan’s Akane Yamaguchi continued to be on a roll, with her second straight victory in Group B taking her into the semi-finals. Yamaguchi beat Thailand’s Ratchanok Intanon in an enthralling contest, 21-15 16-21 21-12.

Wang Yihan said the recurrence of a back injury had caused her to retire.

“I haven’t been well – apart from the back injury, I fell sick during the China Open and lost a lot of weight, so I have been weak. I’m not as young as I used to be. Now it’s harder to recover as I’m older. I’m okay with it because I cannot change some things,” the 2011 champion said, rather philosophically.

“Other teams have been picking up. They have younger players who can learn things very fast, that’s the advantage they have. When we were young we picked up a lot from our rivals. Failure is not always a bad thing and learning from failure is crucial. So we will try to get back. I want to recover from injuries as soon as possible so I can get ready for the Olympics.”

Yamaguchi was tested in a tactical battle by Intanon. The battle between two contrasting styles finally went Yamaguchi’s way.

“More than reaching the semi-finals, I’m happy that I could play my game today,” said the Japanese schoolgirl.

“It was really tough, but I sensed that Ratchanok was getting tired in the third game, so I just hung on. It’s tough to read her strokes, but I never gave up.”

“She is so good in defence, it puts a lot of pressure on you because you don’t know what to play on the next shot. Perhaps it’s hard for players to read her because she is new. I felt the same way when I was starting off. Other players don’t know how to play you. Once they figure it out, it will become different. I think I will be playing her a lot. I was like her when I was 17. After becoming World Champion, there was a lot of pressure. I’m not satisfied with my season, because I put a lot of pressure on myself. Next year I have to get more confident and train harder because the qualification for Olympics begins. I was unlucky this year.”

Boe and Mogensen (featured image) had a 5-1 record over Japan’s Hiroyuki Endo/Kenichi Hayakawa, but most of those matches had been close. The Japanese were close to taking the match with a 19-16 lead in the second, but the Danes turned the tide and never looked back in the decider: 16-21 21-19 21-16.

“It was a close match today. We’ve played them many times. We are 5-1 but we have a lot of respect for them,” said Mogensen.

“This wasn’t one of our best matches. They’re one of the best pairs, so it’s not easy. The second set was good, we were relaxed and try to stay calm at the end and we took it to the finish. It was a big disappointment for us to get a bronze at the Worlds Championships in Denmark. We hoped this season would change. So far it’s okay, but we hope we can close it well with a good win.”

Fischer and Pedersen handed Indonesia’s Tontowi Ahmad/Liliyana Natsir their second straight defeat with a 21-15 22-20 result, but their Danish compatriot Hans Kristian Vittinghus could not sustain his momentum after a first game win against Men’s Singles top seed Chen Long. Vittinghus went down 13-21 21-10 21-9.