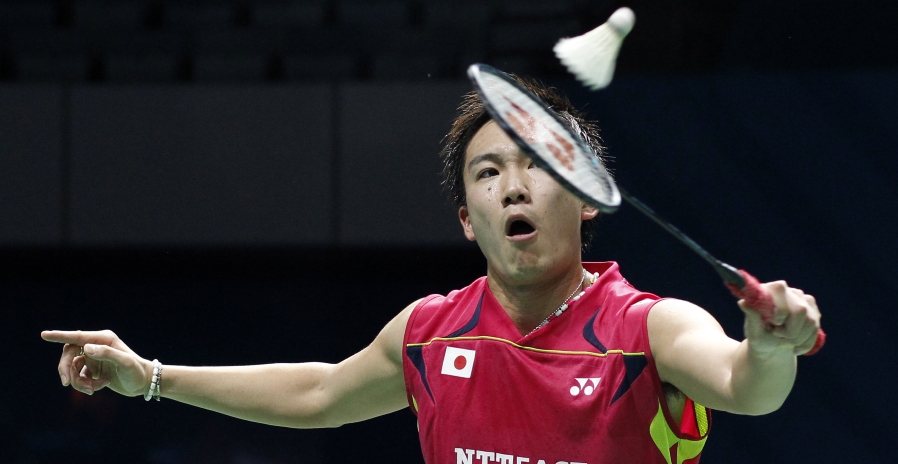 Kento Momota bounced back from his opening loss to surprise Jan O Jorgensen on the second day of the BWF Destination Dubai World Superseries Finals today.

Japan’s Momota (featured image) had lost his previous three matches to Jorgensen, but showed patience and composure in overcoming the Dane 20-22 21-18 21-12 in 66 minutes in their Men’s Singles Group B match.

Jorgensen won a tight first game and nearly stole the second after trailing 15-19. Momota saw his lead evaporate from 19-15 to 19-18 but was able to take the game; it was a more comfortable affair for the Japanese in the third.

“Jorgensen has great stamina and sharp strokes, so I was trying to avoid mistakes. I had to be patient. I was trying not to think of the first game loss. I just wanted to be aggressive. Yesterday’s loss hurt me and I badly wanted to win.”

Momota was one of the heroes of Japan’s Thomas Cup victory in May, but has had early exits in most events since then. Momota admitted it had been hard to rediscover his best form.

“I was suffering a lot; it was difficult. But today’s victory means a lot because I respect Jorgensen. Maybe my level went down because I relaxed emotionally after winning the Thomas Cup.”

Meanwhile, in Group A, Korea’s Son Wan Ho, one of the contenders for the title, retired in the second game against Kenichi Tago due to injury. Son, who complained of a hamstring problem in his opening loss to Denmark’s Hans Kristian Vittinghus, retired at 21-9 11-3 down.

The retirement signalled the end of Son’s campaign, as BWF’s General Competition Regulation (16.2.5) states: “If injury, illness, disqualification or other unavoidable hindrance prevents a player/pair completing all the pool matches, all the results of that player/pair shall be deleted. Retiring during a match shall be considered to be not completing all pool matches.”

“This was an old hamstring problem that flared up recently,” said Son.

“I’ve had a good year. The Asian Games team gold medal win at home was most memorable, but it has meant additional pressure.”