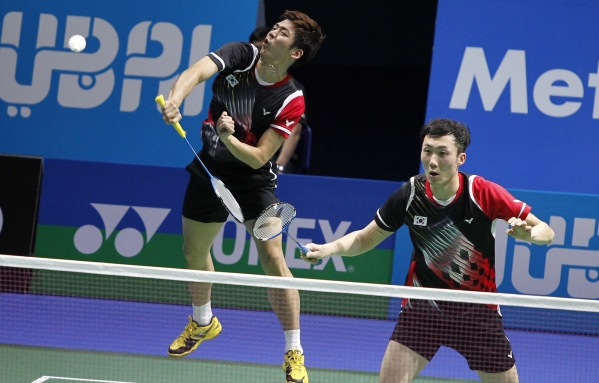 An unlikely result featured in the opening session of the long-awaited BWF Destination Dubai World Superseries Finals, which began at the Hamdan Sports Complex this morning.

Hans-Kristian Vittinghus was seen as the underdog in Men’s Singles Group A, and with a 0-4 record against the in-form Son Wan Ho, the Dane admitted he wasn’t the favourite in their clash. However, he produced his characteristically steady game against Son, who never looked like he was going to trouble Vittinghus; the Dane closing out the match 21-13 21-16 in 42 minutes.

“I’m extremely pleased with my performance. Going into the match I knew I had to play my very best badminton, as I have a 0-4 record against him, so I didn’t stand a good chance if you saw the statistics,” said Vittinghus.

“So I brought my best game and I don’t think I’ve played better than this. The conditions are

perfect for me; it’s slow. There will be a lot of rallies and I don’t make a lot of mistakes because it’s a lot easier to control. I couldn’t be happier with my start.”

His compatriot Jan O Jorgensen too enjoyed a good start, beating last year’s runner-up Tommy Sugiarto 21-15 21-19. Jorgensen took some time to find his rhythm and eventually cruised through against the Indonesian in the Men’s Singles Group B match.

“It was a really bad game, I didn’t play good at all in the beginning,” said Jorgensen. “I had to settle with the conditions in the beginning. I had to cope with slow conditions, and I used my physical ability and strength to overcome him, and I knew if I kept at it, it would turn.”

Speaking of his group, Jorgensen admitted he was happy with his group. “I had a good draw. That’s pretty clear. Son Wan Ho and Chen Long were the best players over the last few months. I’m happy to avoid Son. My first goal is to get through from the group. Everything so far has been outstanding. I’m physically fine. I haven’t had two straight injury-free weeks since the World Championships. It’s been a tough time. I have tried to cope and avoid the bad thoughts. It’s easy to get negative when you get so much against you.  I tried my best to stay positive; I played some tournaments where I was okay to get the points from the first round and qualify for this tournament. The conditions are great. Hopefully in a few years’ time, this will grow really big. It can’t get better than this.”