The first BWF Destination Dubai World Superseries Finals promises to be an explosive battle royal from day one.

In fact, the opening morning’s action includes an all-Korean clash featuring the Men’s Doubles finalists of the BWF World Championships, as Lee Yong Dae watched as he and partner, Yoo Yeon Seong, were drawn in the same group as their team-mates, Ko Sung Hyun and Shin Baek Choel, who ousted them in that gripping Copenhagen showdown in August. There will be early tears for some illustrious pairs in this deadly cluster as Indonesia’s defending Finals champions, Mohammad Ahsan and Hendra Setiawan, are also in Group A with the Koreans, as well as China’s Chai Biao/Hong Wei (China). 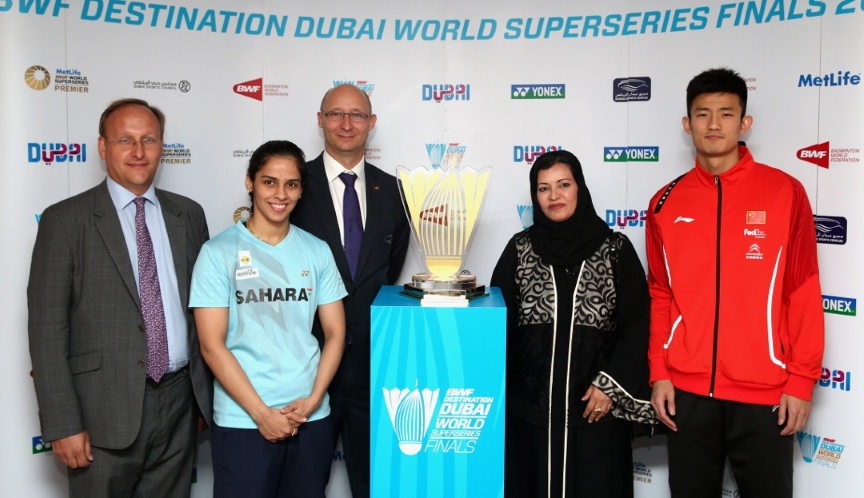 This was among the many exciting scenarios which unfolded from this morning’s draw ceremony for the season-ending finale, as players and pairs who might have hoped to clash later in the tournament found themselves grouped together for the round-robin stage.

Drama will also be high in Group A of Men’s Singles which saw World champion and leading contender, Chen Long of China, surrounded by Son Wan Ho of Korea; Japan’s Kenichi Tago and Hans-Kristian Vittinghus (Denmark); all capable of causing major mayhem at their best.

Tago brought some sincere humour to the situation, stating candidly: “I would prefer to be in Group B!” 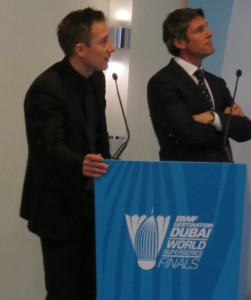 Former Men’s Singles No.1 Peter Gade of Denmark, offering his views on the groups, called Men’s Singles Group A the “group of death”, with Chen Long bracketed with recent nemesis Son. The Korean beat him twice this year: in the Asian Games team event and in the Hong Kong Open final. Chen Long’s visible grimace when Son’s name was pulled was an indication he knows the testing times ahead.

In Women’s Singles, China Open champion Saina Nehwal hinted she was lucky to have avoided Wang Yihan in her group.

“I prefer playing Shixian to Yihan, since it has been tough for me against Yihan. But Wang Shixian too is a difficult player and it might be a long match.”

Nehwal and Wang Shixian have each won two of their four clashes this year so this could well be a tie-breaker of sorts. However, the Indian star is not underestimating the Koreans, acknowledging she expects some long, tough matches. 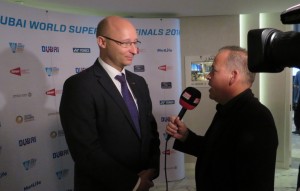 Denmark’s Christinna Pedersen, who will be defending two titles, complimented the Hamdan Sports Complex while noting it will be hard to repeat her enviable accomplishment of a year ago. Her plan is to concentrate on her group matches in Women’s Doubles (with Kamilla Rytter Juhl) and Mixed Doubles (with Joachim Fischer Nielsen) and try to reach Saturday’s semi-finals in both categories.

England’s husband-and-wife duo, Chris and Gabrielle Adcock, and Korea’s Lee Yong Dae were all complimentary of Dubai, noting they had been keen to qualify for the blockbuster event in the Middle Eastern metropolis.

“We’ve been treated very well…it’s nice to be playing somewhere different. I know there’s a lot of excitement among the players to be here in Dubai,” noted Gabrielle Adcock.

“I can tell you it’s an amazing feeling for many of us involved in the planning and execution of this tournament,” said Lund, who was accompanied on the stage by Dr Aysha Abulsmait, Director of Communications and Marketing, Dubai Sports Council; Alastair Ruxton, Commercial and Legal Director at Falcon and Associates; Peter Tarcala, Chair of BWF’s Events Committee, and Isabelle Jobard, Tournament Referee.

“The significance of this occasion – to have the very best players in the world showcase their skills in Dubai – cannot be underestimated,” added Lund.

Calling Dubai not just a destination but also a gateway for BWF in the region, Lund said the city offered the “best of choices” thanks to its accessibility.

Dr Abulsmait noted that the BWF Destination Dubai World Superseries Finals was one of the most important events in the calendar.

“Dubai Sports Council is keen to attract the best and most important sports events, and to make sports accessible for all in Dubai,” said Dr Abulsmait.