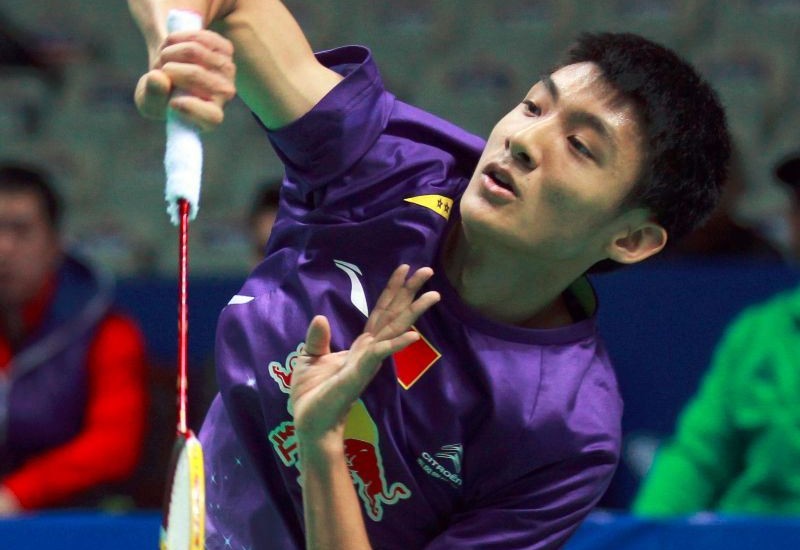 China’s Xue (BWF home page), India Grand Prix Gold champion earlier this year, overcame a battling Wong Wing Ki (Hong Kong) in the Men’s Singles final. Wong (above) comfortably took the opening game, but from 9-all in the second, Xue stamped his authority and appeared to have the match under control with a 19-14 lead in the third. Wong however gave him a scare by taking five of the next six points before Xue edged past: 16-21 21-13 21-19.

While Xue reached the final without dropping a game, Wong was tested in four of his five matches. In the third round he survived an 81-minute long marathon over Gao Huan (China), 19-21 21-15 23-21, after saving one match point. The semi-final too was a long affair, as he needed an hour to beat Indonesian Masters champion HS Prannoy of India.

In contrast to the Men’s Singles final, the Women’s Singles final was mostly one-way traffic as PV Sindhu did not allow Korea’s Kim Hyo Min a look-in. The Korean had a brief lead at 11-8 in the second but that’s as far as she could get, with Sindhu claiming the title: 21-12 21-17.

Both Sindhu (right) and Kim had to pass stiff tests earlier in the draw — Sindhu against Lindaweni Fanetri (Indonesia) and Han Li (China), and Kim against Beiwen Zhang (USA) and Sun Yu (China).

The match of the finals was without doubt the Mixed Doubles clash between Edi Subaktiar/Gloria Emanuelle Widjaja (Indonesia) and Danny Bawa Chrisnanta/Vanessa Neo (Singapore). The Indonesians (above) were a game and 20-17 up in the second, but the match turned dramatically as Chrisnanta and Neo saved the three match points and went on to save five more. The Singaporeans eventually squeezed past at 30-29. The pattern almost repeated in the decider with Subaktiar and Widjaja blowing The all-China Women’s Doubles final went the way of Ou Dongni/Yu Xiaohan (left) after the qualifiers outclassed No.6 seeds Huang Yaqiong/Zhong Qianxin 19-21 21-19 21-7. On way to the title, the winners overcame the likes of Eom Hye Won/Yoo Hae Won (Korea) in the quarter-finals and Vivian Hoo/Woon Khe Wei (Malaysia) in the semi-finals.

Danny Bawa Chrisnanta made up for his disappointment in Mixed Doubles by winning the Men’s Doubles title with Chayut Triyachart. The Singaporeans prevailed in a see-saw battle over Indonesia’s Angga Pratama/Ricky Karanda Suwardi: 21-19 22-20.

Chrisnanta/Triyachart (below) emerged victorious after a tough campaign that lasted the whole week, beginning with the first round win over Chang Kai Liang/Su Yi Neng (Chinese Taipei); Huang Kaixiang/Zheng Si Wei (China) in the second; Wang Yilv/Zhang Wen (China) in the quarter-finals and Wahyu Nayaka Arya Pankaryanira/Ade Yusuf (Indonesia) in the semi-finals.