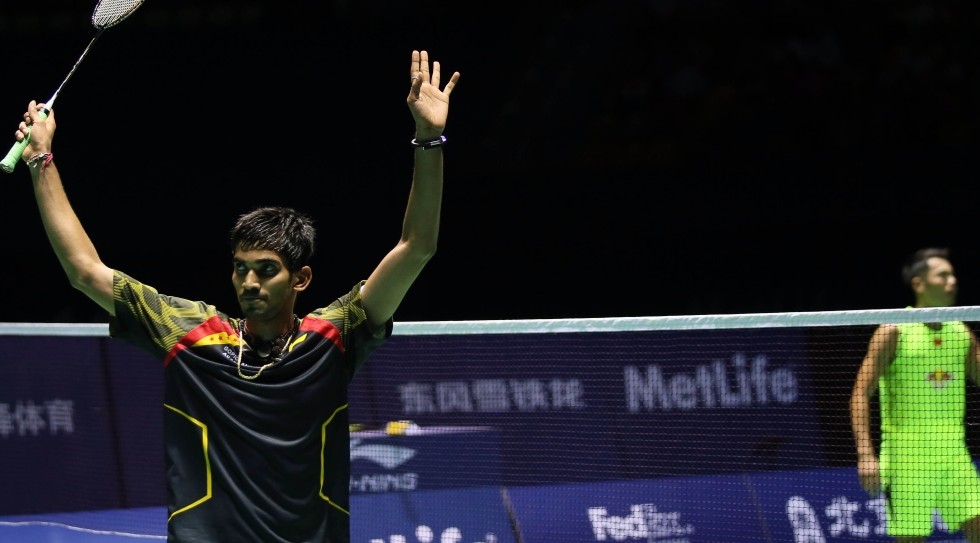 The badminton equivalent of an earthquake shook the Thaihot China Open with rank underdog Srikanth Kidambi outplaying Lin Dan in the final today. 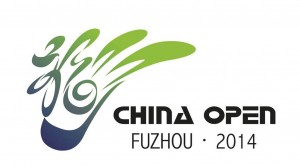 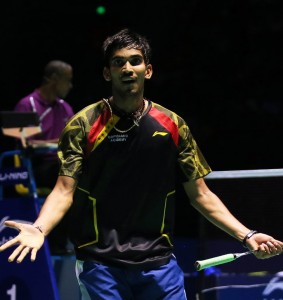 For Lin, the defeat was his first in a final since the 2012 Korea Open to Lee Chong Wei of Malaysia.

For a player who recovered from a serious setback a few months ago – a bacterial infection in his brain in June had raised the direst scenarios – to a title victory against his idol was the stuff of the wildest dreams, and the soft-spoken Kidambi struggled to put words to his emotions after the win.

“To beat Lin Dan in a final is a dream come true,” he said.

“I just played my 100 percent because there was nothing to lose. Before coming here, I was playing well. When I beat my compatriot (RMV Gurusaidutt) in the first round, I felt confident because it’s always tough to beat a player who knows you well. I just wanted to win each round that I played. As I got close to a second game win, I just told myself to focus on the next point, since I have lost a few matches while leading. Today’s my coach’s (Pullela Gopichand) birthday, so this title is a gift to him.”

Kidambi played a smart game against a player with a vast arsenal. He starved Lin of the opportunity to unleash his thunderbolts, nor did he allow him a quick game. Kidambi preferred to play the shuttle soft for the most part, was alert for Lin’s cross netshots, and bravely went for the lines when he had the option to smash. Given no quarter, Lin showed his frustration, committing a series of errors in both games as he went down 21-19 21-17. 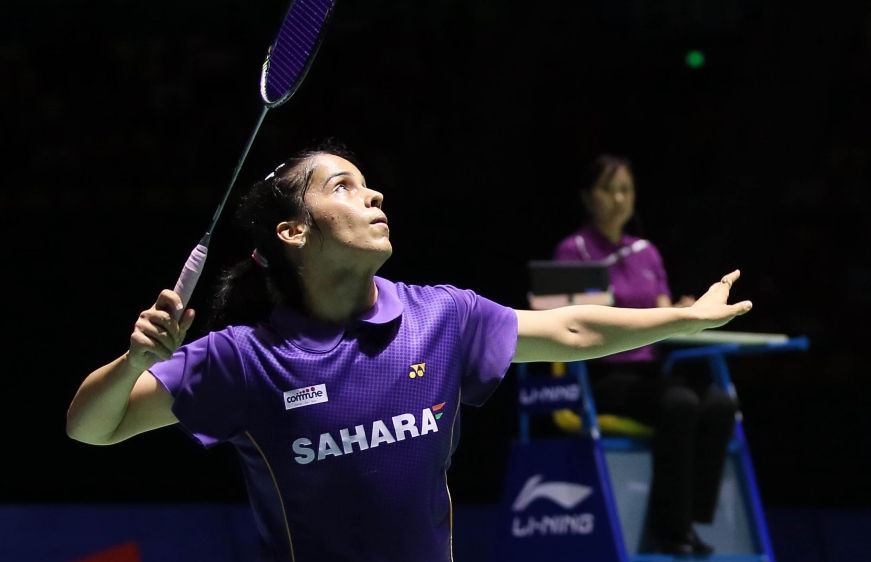 Only briefly in the second game did he unleash his firepower, but the frequent errors appeared to sap his resolve, and he admitted as much.

“I was injured during the last month, so getting into the final made me happy. Srikanth played positively. The loss of the first game affected my mood. I hadn’t practised the last few weeks, so I could not adjust my game.”

Nehwal was masterly against World Junior champion Akane Yamaguchi. Yamaguchi’s tireless rallying style had broken the spirit of players like Sun Yu (China) and Bae Yeon Ju (Korea) in earlier rounds; Nehwal prevented the match from becoming a similar contest. The first game was hers quickly; Yamaguchi however settled in for a long brawl in the second, and it was a neck-and-neck affair. 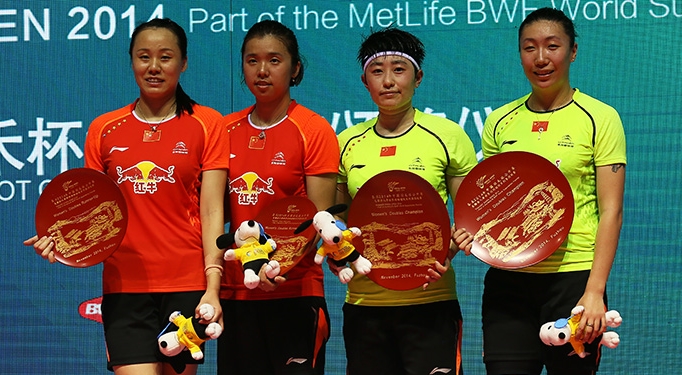 Yamaguchi had game point at 20-19 but Nehwal pulled conjured a magical stroke at that point – a deceptive service return skimming the net that helped her pull level. The Indian had match point after a long exchange that Yamaguchi finally lifted long.

“I was surprised to see the scores by which Akane beat Sun Yu and Bae Yeon Jun,” said Nehwal after wrapping up the match 21-12 22-20. 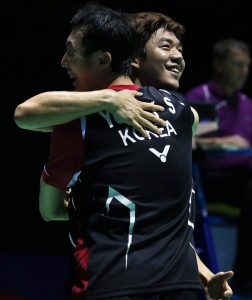 “I was not expecting to beat three Chinese in a row. I will remember this title for the rest of my life. Each year I used to wonder if I would ever win the China Open because it is such a difficult event. The crowd was lovely. It was a special feeling to see a full house crowd cheering for both of us.”

Nehwal added that she was looking forward to the BWF Destination Dubai World Superseries Finals since that would attract the very best players in the world.

“Fuzhou is called the ‘City of Good Fortune’ and it has brought us luck,” said Yu Yang.

“It is one of the birthplaces of badminton in China, so we were determined to do well here.” 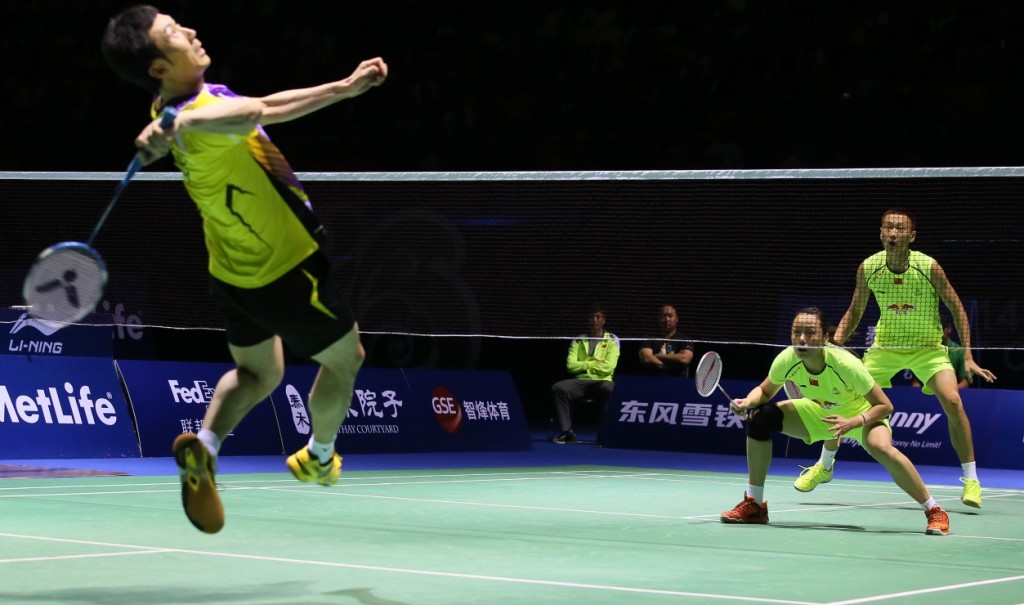 The opening match of the day, Mixed Doubles, was also a tight contest. At 17-all in the third, the match could have swung either way. Eom faltered at the net with Zhao hovering in front, and that was the opening China needed to surge to victory: 23-25 21-14 21-18.