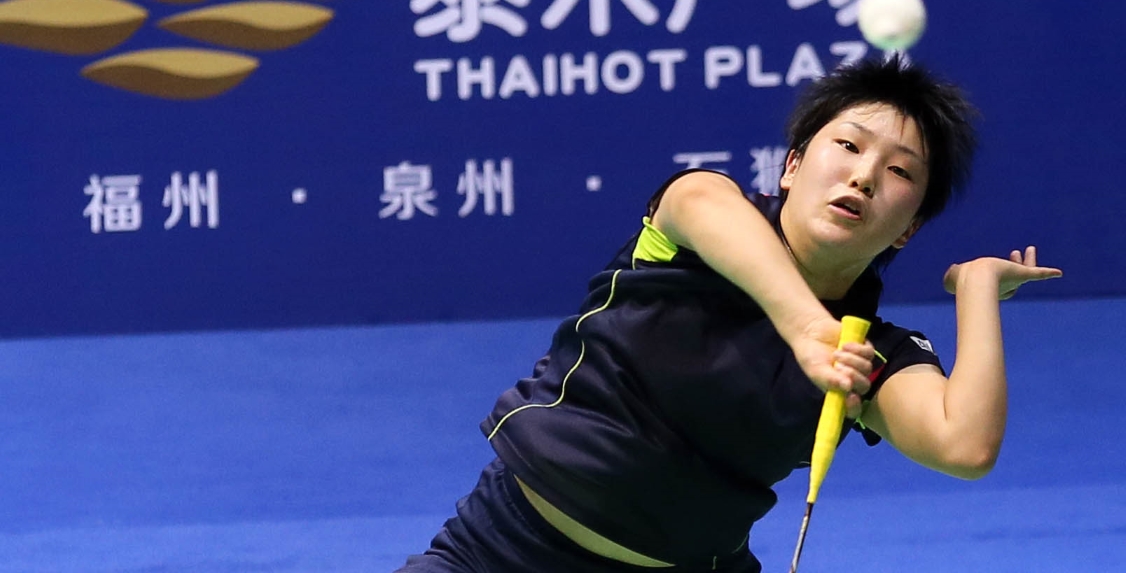 China suffered twin blows in singles today with the defeat of local hopes Chen Long and Wang Shixian in the Thaihot China Open.

Wang Shixian has been in sublime form this year, with three World Superseries titles and consistent wins over her closest rivals Li Xuerui and Wang Yihan. However, she looked a shadow of herself against Japan’s Akane Yamaguchi in the Women’s Singles second round today. The Japanese World Junior champion dictated the pace from the outset and never relaxed her grip on the proceedings. Wang appeared edgy from the beginning and could not alter the momentum. Yamaguchi stonewalled everything that Wang threw at her with athletic retrievals to her steepest shots until the No.2 seed had nothing left to offer. The 21-14 21-10 result was Wang’s worst defeat of the year.

A short while earlier, Men’s Singles top seed Chen Long was handed the same bitter medicine by Germany’s Marc Zwiebler. Chen had almost wrapped up the match with a game and 17-10 lead but as Zwiebler closed down the difference, the pressure weighed him down and he was unable to make his formidable skills count. Zwiebler remained calm even as Chen saved three of the four match points until at last the top seed hit weakly into the net.

Zwiebler stated that home pressure worked against his opponent.

“I knew he was the favourite. In the first set he showed what he could play. In the second he was in front and maybe he lost a bit of concentration. If it’s so close it’s always about a bit of luck; in the third I felt more confident and he got more nervous. He’s a new World Champion, he’s the top seed at home, he has a lot of pressure on his shoulders. I didn’t want him to get a big lead; of course in the end it was very close. It was fun for me; I had nothing to lose.” Zwiebler rated this as possibly his best win this year. “I played a lot of good matches this year, but I missed the results. In Japan I lost very close to Lee Chong Wei. I had a few other matches; of course this is possibly the biggest win.

“I’ve been injured the last four-five months so I can’t practice as much as I want to. I thought of pulling out from today’s match because my foot hurt, but I’m happy that I got through and I hope I have energy for tomorrow.”

Denmark’s Jorgensen had won their last three matches and had his opportunities to make it a fourth in a long and engrossing tactical battle. Lin took his time to find his range. Through the first two games he chose to play the shuttle around without offering many glimpses of his explosive jump smashes, and even when he did, Jorgensen’s defence was good enough to put the pressure right back on him. With the first game in his bag and leads of 18-17 and 19-18 in the second, the Dane had a sniff at victory even as a stunned silence descended on the crowd. Lin however played nervelessly on those points to take the match to a decider, in which he shifted gears and held the lead throughout.

“I had my chances today but it’s tough to play here in China. I want to play big games like this; this is what I play for,” said Jorgensen. Asked if Lin’s rallying style of play was different from his usual approach, Jorgensen said: “He’s so tough he has many variations from every part of the court. He’s more tricky (now). Around 2008 he was all smashes. Of course the style of the game has changed as well. You cannot run around and attack all the time because you run low on stamina, and my defence is too good for that. You need to lock your opponent and find a way and that’s just what you saw today. We had a good game and I’m disappointed that I let it slip. I love playing him. I don’t care whether it’s first round or second round or final; this is what I play for.”

Lin will be the only Chinese player in the Men’s Singles quarter-finals. Apart from Chen, other local hopes too fell: Gao Huan to India’s K Srikanth; Wang Zhengming to Japan’s Kento Momota and Xue Song to India’s Kashyap Parupalli.