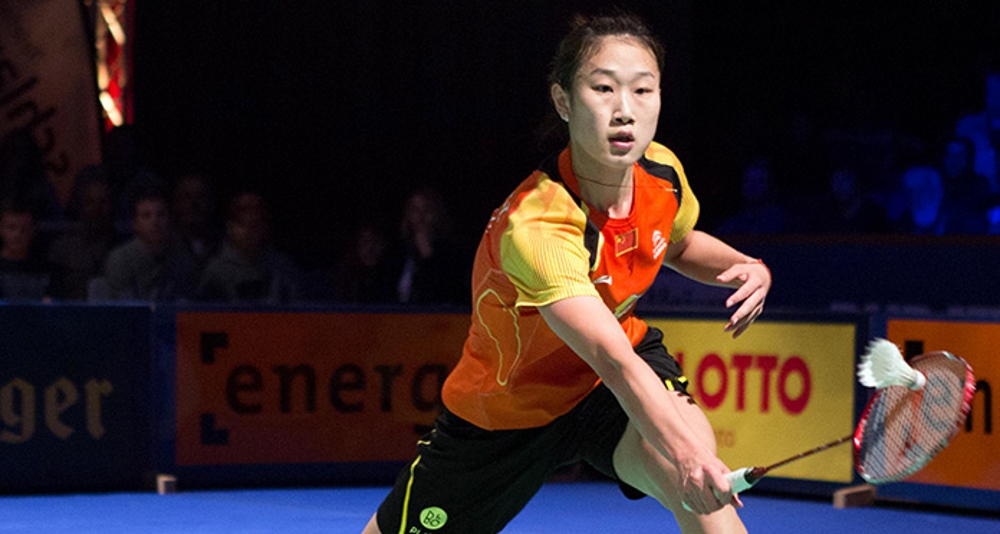 China’s youthful squad returned with titles in the other four categories from the Grand Prix Gold event, with Sun Yu emerging champion in Women’s Singles. Chinese Taipei’s Chou (right), winner of the Yonex French Open recently, had a relatively easy final over Irishman Evans after a week of tough matches. Chou was tested all the way, beginning with his opener against Estonia’s Raul Must. Chou recovered from precarious positions and saved a match point on his way to a 13-21 21-12 22-20 victory over Must.

In the third round he had to fend off a stubborn Andre Kurniawan Tedjono (Indonesia) in three games. China’s Tian Houwei had his chances against Chou in their semi-final, but the second seed proved his mettle once again as he eked out a win at 21-14 16-21 21-19. The final, on the other hand, took him just 33 minutes as he outplayed Evans 21-17 21-10.

There were other note-worthy performances in the category. India’s HS Prannoy (below), winner of the Indonesian Masters in September, outlasted Denmark’s Emil Holst in a sensational quarter-final match, 21-14 19-21 30-28, in which he saved three match points while Holst succumbed after saving six match points. Chinese qualifier Liao Junwei too created a buzz as he charged through the draw beating higher-ranked players such as Sourabh Varma (India, 10) in the first round and compatriot Gao Huan in the third, before he ran into Tian in the quarter-final.

Sun Yu (featured image) faced a doughty challenger in young compatriot He Bing Jiao, runner-up at the World Junior Championships and winner of the Youth Olympic Games this year. Sun, whose last final was at the Swiss Open in March, was outclassed in the opening game by her left-handed opponent but came back strongly to take the match 16-21 21-15 21-12.

The biggest piece of news in Women’s Singles was the return of World champion Carolina Marin (Spain), who has been out of competitive action since winning the world title in August. Top seed Marin was stretched by Denmark’s Line Kjaersfeldt in the quarter-finals and was no match for Sun Yu in their semi-final as she fell 21-19 21-14.

He Bing Jiao, meanwhile, shot down some formidable opponents. The qualifier fought past USA’s Beiwen Zhang in three games in the quarter-finals and destroyed Canada’s Michelle Li in the semi-finals (21-16 21-10) to enter her first Grand Prix Gold final.

He Bing Jiao’s team-mate from China’s World Junior Championships squad this year, Chen Qingchen, claimed the Mixed Doubles title with a new partner. Chen, who won the World Junior title with Huang Kaixiang, was paired with Zheng Si Wei and the duo (above) hit the perfect note by bringing down no less a pair than top seeds Chris Adcock/ Gabrielle Adcock. England’s world No.5 pair was shocked 14-21 21-14 21-18 by Zheng/Chen in their semi-final.

Another top pair, world No.9 Michael Fuchs/Birgit Michels (Germany), was also stopped in the semi-finals by Indonesia’s Alfian Eko Prasetya/Annisa Saufika. The Indonesians were however outgunned by Zheng/Chen in the final: 21-11 21-13. The other two categories too were won by unheralded Chinese pairs. Men’s Doubles sixth seeds Wang Yilv/Zhang Wen (above) prevailed over European champions Vladimir Ivanov/Ivan Sozonov in a semi-final thriller before beating Denmark’s Anders Skaarup Rasmussen/Kim Astrup Sorensen 21-14 21-10 in the final. The Danes chalked up impressive victories earlier in the draw, over senior compatriots Mads Pieler Kolding/Mads Conrad-Petersen (2) in the third round and Michael Fuchs/Johannes Schoettler (Germany, 3) in the semi-finals. Ou Dongni/Yu Xiaohan clinched the Women’s Doubles crown over surprise Russian finalists Ekanerina Bolotova/Evgeniya Kosetskaya, 21-15 21-15. The Russians had upset England’s Heather Olver/Lauren Smith (8) in the second round and China’s Tang Yuanting/Huang Yaqiong in the semi-finals. Ou Dongni/Yu Xiaohan (above; right) were relatively unchallenged throughout, as they won the title without dropping a game all week.