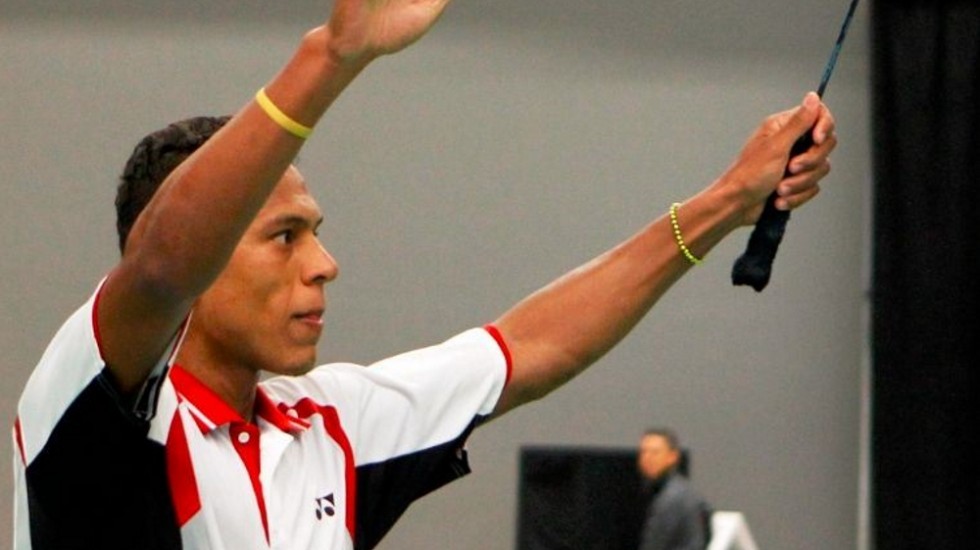 The reigning champions in all five categories retained their titles as the XIX Pan Am Championships 2014 concluded in Toronto yesterday.

Cuba’s Osleni Guerrero (featured image), a third year university student in physical education and sport, was taken the distance by USA’s Bjorn Seguin.  Seguin established a small lead in the first game but Guerrero caught up with him and the scores were close until Seguin edged ahead, 21-19.

Guerrero, who trains under coach Roberto Mollinedo, rated this as the best win of his career. As widely expected, Michelle Li (above; 2nd from left) breezed past Rachel Honderich in the all-Canada Women’s Singles final. The favourite was never in any doubt and led throughout the two games, except for brief moments in the early part of each. The 21-13 21-16 result was achieved in 33 minutes.

Adrian Liu/Derrick Ng (below) had it surprisingly easy over USA’s Phillip Chew/Sattawat Pongnairat in the Men’s Doubles final. The USA pair had given them a hard time during the team event final last week, with the Canadians squeezing through in three games. However, in yesterday’s final, the Canadians took just 25 minutes to wrap up the match, 21-15 21-13. Women’s Doubles favourites Eva Lee/Paula Lynn Obanana (USA; below) were given a scare by Brazil’s Lohaynny and Luana Vicente in the opening game. Lee/Obanana led 18-15 but the Vicente sisters picked up five points in a row to hold two game points. The top seeds recovered in time to stop the Brazilians and established their dominance in the second game to pocket the title 23-21 21-14. Canada finished with three titles while USA and Cuba got one apiece.

“Playing at home is usually a gift or a curse, but with the wonderful crowd support, it definitely helped me and Alex push through to win after losing the second game,” said Toby Ng, who works as a strength and conditioning coach.

“Our opponents put up a great fight, but I can’t help but wonder if they were fatigued by playing many team event matches this week. It’s great to see some of my teammates rising up to perform, like Andrew D’Souza who defeated a seeded player, and especially Rachel Honderich who did well in singles and played a major role in the team event doubles final. It’s nice to see the Pan American level rising, but I think we need more exposure. There’s huge potential over here.

“It’s also nice to get to see and experience the rise of Michelle Li! I hope she continues to put Canada on the badminton map!”