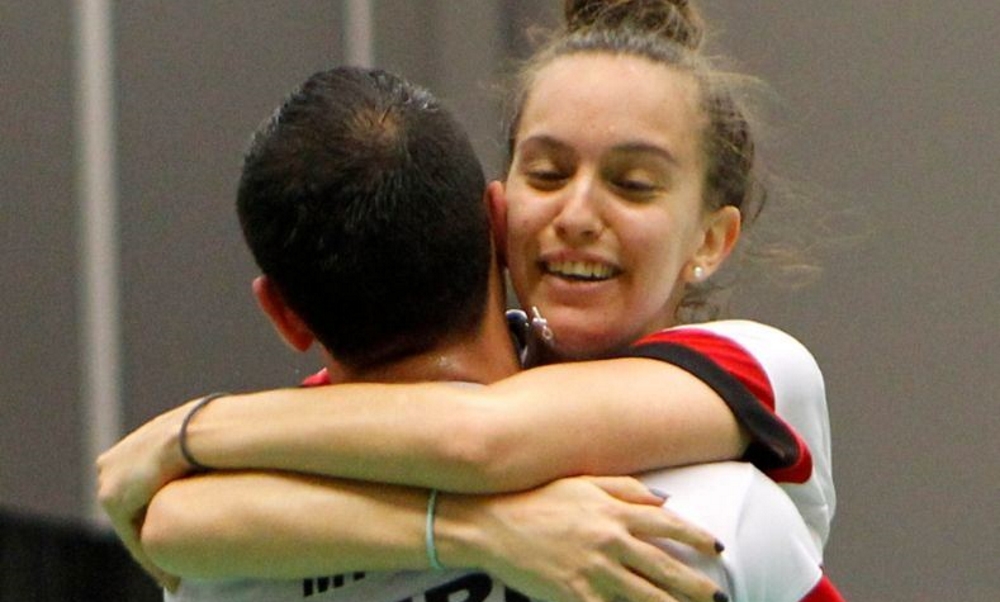 D’Souza (left) held off Pongnairat (USA), one of the favourites for the title, in a close first game before easing through comfortably in the end, 21-19 21-16 in the championships begin held at Toronto, Canada. D’Souza’s win reversed the loss he faced in the team event final. He will face No.5 seed Bjorn Seguin (USA), who needed three games to get past Sergiy Shatenko (Canada), 14-21 21-15 21-16.

There were no hiccups for other favoured players. Top seed Osleni Guerrero (Cuba), Daniel Paiola (Brazil, 3), Howard Shu (USA, 4) and Kevin Cordon (Guatemala, 6) booked their last-eight places with straight-game wins. Joining them in the quarter-finals were Mexico’s Job Castillo and Guatemala’s Rodolfo Ramirez. Both Shu and Cordon dashed the hopes of home players – Shu with a 21-15 21-9 result over Joseph Rogers and Cordon with a 21-17 21-9 verdict over Martin Giuffre.

Among the other upsets of the day was the fall of Mixed Doubles second seeds Hugo Arthuso/Fabiana Silva (Brazil). Their conquerors in the second round were Canada’s Toby Ng/Alex Bruce (21-12 18-21 21-11) who then went on to defeat Jamaican pair Gareth Henry/Geordine Henry (22-20 21-11) to book their spot in the semi-finals against Peru’s Andres Corpancho/Luz Maria Zornoza. The other semi-final will pit top seeds Phillip Chew/Jamie Subandhi (USA) versus another Peruvian pair, Mario Cuba/Katherine Winder (featured image), who were expressive all through the match and joyous after scoring the winning point.

Brazil’s Lohaynny Vicente/Luana Vicente (below) were among the few Women’s Doubles pairs in action yesterday in the first round. The Vicente sisters, who were raised in a favela, surprised the Canadian pair Grace Gao/Rachel Honderich 17-21 21-15 21-12 and hoped they could go all the way to a podium finish. Luana (20) and Lohaynny (18) revealed that they hailed from a low-income social housing project in Rio and would love to be role models for their family and the kids in their neighbourhood.

“We have started to train more seriously and are more and more confident when playing against higher ranked players,” the sisters said.

Their coach (former Portuguese player Marco Vasconcelos) said their social background had turned them into fearless competitors who wanted to do something positive with their lives and lauded their work ethic.

However, in Women’s Singles, Lohaynny Vicente, the No.4 seed, was stopped by Rachel Honderich in the second round. Honderich prevailed 21-13 21-19 to set up a quarter-final against compatriot Kyleigh O’Donoghue. Top seed Michelle Li (Canada) eased past USA’s Iris Wang, 21-8 21-16, and faces Mexico’s Mariana Ugalde, a 21-13 21-18 victor over Canada’s Bethany So.

Sattawat Pongnairat made up somewhat for his Men’s Singles loss by entering the Men’s Doubles quarter-finals with Phillip Chew. The top seeds from USA were too strong for Canada’s Kevin Li/Nyl Yakura (21-19 21-17); they face Mexico’s Job Castillo/Antonio Ocegueda. Veteran Mathew Fogarty (USA) also made the quarter-finals with Bjorn Seguin and will face Dominican Republic’s Nelson Javier/Alberto Raposo.

On This Day:
Jorgensen Makes Europe Stand Tall in Indonesia