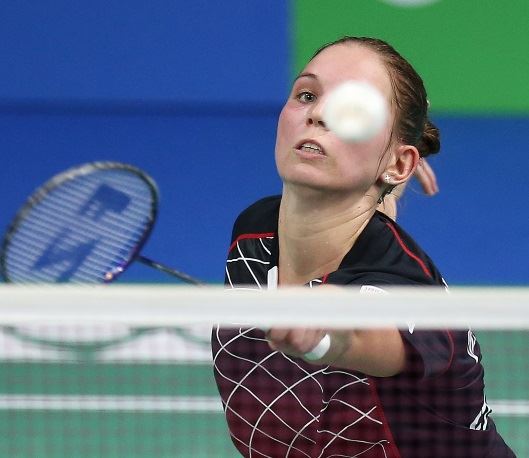 Chris and Gabrielle Adcock led a trio of seeded casualties who crashed out in the first round of Mixed Doubles tonight as the Yonex Denmark Open 2014 got underway. Meanwhile, their European counterparts – Michael Fuchs/Birgit Michels of Germany – proved no match for Indonesia’s Riky Widianto/Puspita Richi Dili (right). The No.7 seeds, who had enjoyed a decent run of success in the June stretch of the MetLife BWF World Superseries, could not recapture the form that saw them reach finals in Japan and Australia, surrendering tamely 21-11 21-13.

Another accomplished pair, Ko Sung Hyun/Kim Ha Na also failed to progress, losing 21-18 17-21 21-16 to Maneepong Jongjit/Sapsiree Taerattanachai of Thailand. Danish fans would remember the No.6 seeds who featured in a night-time thriller versus local favourites, Joachim Fischer Nielsen/Christinna Pedersen, in last year’s quarter-finals. The Koreans were sensationally thwarted, 21-14 10-21 30-29, despite having ten match points.

Their team-mates Shin Baek Choel/Chang Ye Na also perished at the first hurdle but would argue they had a tougher task with Olympic, World and Asian Games titans, Zhang Nan/Zhao Yunlei, blocking their path to the

second round. The Chinese champions and top seeds won 21-14 22-20, to make a good start towards defending the title they wrested a year ago. Xu Chen/Ma Jin also advanced China’s Mixed Doubles cause – 21-18 21-14 against Germany’s Max Schwenger/Carla Nelte. A milder shock was the defeat of Singapore’s Danny Chrisnanta/Vanessa Neo – 18-21 21-15 21-19 – to promising Chinese duo, Lu Kai/Huang Yaqiong.

Meanwhile, seasoned campaigners and No.2 seeds, Fischer Nielsen/Pedersen, were joined by compatriots, Mads Pieler Kolding/Kamilla Rytter Juhl in the second round to keep Denmark’s interest in Mixed Doubles alive. The latter survived a see-saw battle versus Muhammad Rijal/Vita Marissa of Indonesia, squeezing through 21-17 17-21 22-20.

In qualifying action, Ireland’s Scott Evans (below) and Raul Must of Estonia joined Denmark’s Steffen Rasmussen and Joachim Persson in the Men’s Singles main draw. Evans first defeated Vladimir Malkov of Russia (21-13 21-16) before rebounding 17-21 21-19 21-8 against Sweden’s Henri Hurskainen. Rasmussen held off Petr Koukal of the Czech Republic, 23-21 19-21 21-12, in the second phase of qualifying. Mette Poulsen (featured image) of Denmark ousted Matilde Petersen of Sweden, 21-12 21-17, to progress to the first round. Also making it through were Rong Schafer of the USA and Estonia’s Kati Tolmoff. The latter dispelled the threat of Vietnam’s Vu Thi Trang, 14-21 21-16 21-15.

In the doubles categories, the qualifiers were as follows: