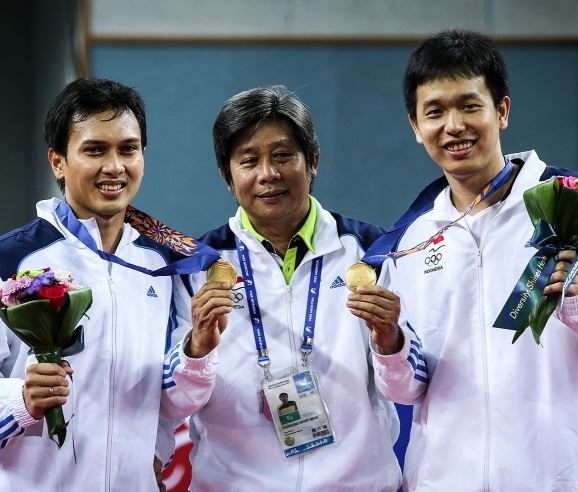 Wang Yihan and Mohammad Ahsan/Hendra Setiawan clinched gold medals as China and Indonesia shared the spoils on the penultimate day of the Asian Games badminton competition.

In addition, China also assured themselves of the Men’s Singles gold with defending champion Lin Dan and World champion Chen Long setting up a dream final.

Wang Yihan (below) salvaged what had been a modest season by her standards by claiming the Women’s Singles gold medal over teammate Li Xuerui. Wang, who crashed out in the second round of three successive tournaments – including the BWF World Championships – turned it around magnificently with a come-from-behind result over the world No.1.

Olympic champion Li ran away with the first game in just 16 minutes, but Wang fought back in typically tenacious fashion. The third game was a mismatch as Li crumbled under the relentless pressure of her opponent, 11-21 21-17 21-7.

In the last match of the day, Indonesia’s Mohammad Ahsan and Hendra Setiawan (featured image, with coach Herry Iman Pierngadi) defied their recent run of poor form against opponents Lee Yong Dae/Yoo Yeon Seong with a steely performance under pressure. Home favourites Lee and Yoo had the edge in the third game and looked set to continue their dominance over the 2013 World champions before fortunes swung dramatically the other way.

The match was a hotly-contested battle. It was Indonesia that came out swinging: Ahsan in particular was on fire in the first game as he patrolled the forecourt and fired winners from all angles. Once Lee and Yoo steadied themselves in the second game, however, the momentum shifted perceptibly. Picking off points with quick rallies, Lee and Yoo surged from 15-all to take the game; they continued to ride the momentum in the third as Setiawan appeared to wilt. Stunning rallies and a few unforced errors from both ends punctuated the action with the finish line in sight. Korea had the edge at 15-13, but Lee then served into the net, and from that point on, the spring was back in the Indonesians’ steps. Ahsan again lifted his game in the final moments, and appropriately enough, it was he who knocked off the winning shot (21-16 16-21 21-17) to help Indonesia defend their Men’s Doubles gold and prolong the agony of Lee and Yoo who had to be content with the runners-up spot at the World Championships as well.

In between these contests, a widely-anticipated clash took place: world No.1 Lee Chong Wei (Malaysia) against defending champion Lin Dan (China). Their last meeting had been the BWF World Championships final of 2013.

Two of the three games were contests of the highest order. The genius and athletic ability of two contrasting styles were pitted against each other and what followed was a brilliant exhibition of courtcraft, athleticism and explosive power. Lee had the first game in his reach with a 20-16 lead; Lin (below) would not concede an inch and picked off the next six points to take the game.

Lee replied by drawing Lin close the net where he showed his authority as Lin uncharacteristically made several errors under pressure. With Lee taking the second game comfortably, it looked set to be another classic match between the two. However, in an anti-climax of sorts, the Malaysian’s level dipped in the decider. A stream of errors flowed from his racket and Lin did not even have to resort to his best form to run away with the match: 22-20 12-21 21-9.

Compatriot Chen Long followed him into the final a short while later after a quick workout against Hong Kong’s Wei Nan. Chen required just 35 minutes to wrap up the match, 21-6 21-10.