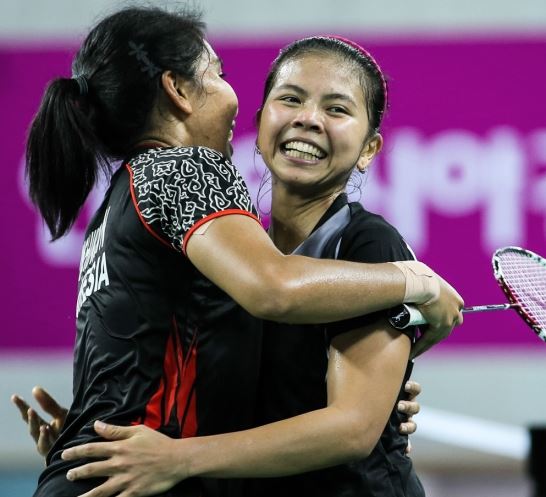 Greysia Polii and Nitya Krishinda Maheswari achieved their career’s biggest triumph as they won the Women’s Doubles gold at the Asian Games 2014 today.

Indonesia had more reason to cheer as three other pairs registered victories. In Men’s Doubles, Mohammad Ahsan and Hendra Setiawan prevented an all-Korea final with a hard-fought 19-21 21-16 21-18 defeat of local hopes Kim Gi Jung/Kim Sa Rang. The Indonesians’ victory means the top two pairs in the world will clash for the gold medal as earlier, Lee Yong Dae/Yoo Yeon Seong blew apart the Malaysian pair of Goh V Shem/Tan Wee Kiong in their semi-final. Lee/Yoo took only 36 minutes to secure their place in the final with a 21-6 21-15 result. Ahmad/Natsir take on familiar Chinese rivals Xu Chen/Ma Jin (left) who have beaten them three times in succession, while Jordan/Susanto have just as formidable a task against another Chinese pair, World and Olympic champions Zhang Nan/Zhao Yunlei, in their semi-final.

It will be a dream match-up for badminton fans in Men’s Singles as world No.1 Lee Chong Wei (Malaysia) booked his semi-final against defending champion Lin Dan (China). Lee (above) spent more time on court than he might have anticipated against Nguyen Tien Minh as the Vietnamese went a game ahead – the first time he has taken a game off Lee in ten matches since 2009. The Malaysian was able to overcome the setback, 21-23 21-16 21-17, in 75 minutes.

In contrast, his semi-final rival overcame a potentially dangerous challenger in No.3 seed Kenichi Tago (Japan) in just 46 minutes: 21-14 21-18. China assured themselves of the Women’s Singles gold medal with Li Xuerui and Wang Yihan making the title round. Li overcame a feisty challenge from Chinese Taipei’s Tai Tzu Ying, 21-16 24-26 21-8, while Wang (above) recovered from a first-game loss to Korea’s Bae Yeon Ju before wrapping up the contest 10-21 21-12 21-16.