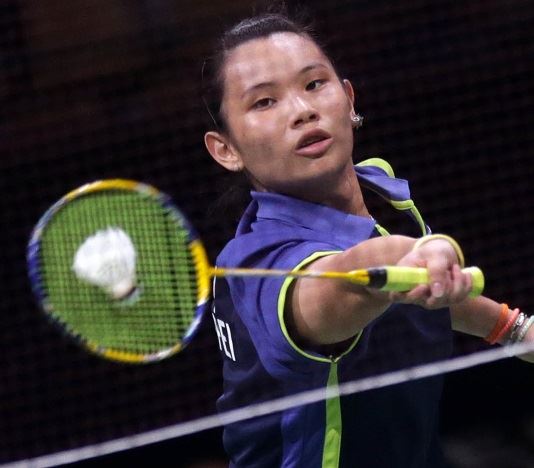 Tian Qing and Zhao Yunlei’s hopes of defending their Asian Games gold medal went up in smoke today at the hands of Greysia Polii/Nitya Krishinda Maheswari.

The World champion pair from China were shocked by the Indonesians in the 70-minute Women’s Doubles semi-final, 21-17 19-21 21-17. The other semi-final saw Japan’s Misaki Matsutomo/Ayaka Takahashi bring to a close the stirring run of Malaysians Vivian Hoo/Woon Khe Wei, 21-16 21-17.

Earlier, Tai Tzu Ying broke Korean hearts after she outlasted local hope Sung Ji Hyun in a long Women’s Singles match. The No.7 seed from Chinese Taipei – who had a 4-4 head-to-head record against the No.3 seed – recovered from the loss of the second game to beat Sung 21-14 9-21 21-17 in the quarter-finals.

However, Tai faces the formidable task of getting past Olympic champion Li Xuerui (China) in the semi-finals as she has never beaten her in eight encounters. Li dismissed Indonesia’s Bellaetrix Manuputty 21-9 21-19 in just half hour in her quarter-final. Another local star, Bae Yeon Ju, made up for her compatriot’s loss by booking her semi-final place. Bae improved her record over Thailand’s Ratchanok Intanon to 3-1 with a 21-4 18-21 21-8 victory, which gave her a date with No.2 seed Wang Yihan (China). Wang ran into stiff resistance early on from India’s Saina Nehwal, but found her rhythm as the match progressed and left the Indian searching for ideas (18-21 21-9 21-7).

In Men’s Singles, the big three names edged closer to an eventual showdown. Top seed Lee Chong Wei (Malaysia) brushed aside a potentially difficult customer in Commonwealth Games champion Kashyap Parupalli of India. Lee needed just 34 minutes to power past the Indian, 21-12 21-11, to make the quarter-finals against Vietnam’s Nguyen Tien Minh, against whom he has a 11-1 record.

Also progressing was his familiar rival Lin Dan (China), who was in a sticky situation in the second game against Hong Kong’s Hu Yun. Despite that, he wrapped it up in straight games, 21-16 22-20. Compatriot Chen Long also booked his quarter-final spot with a 21-19 21-6 rout of Japan’s Kento Momota (above). Korea’s strength in the paired events was very much on display as their two Men’s Doubles pairs entered the last-four. Favourites Lee Yong Dae/Yoo Yeon Seong might have anticipated trouble against Indonesia’s Angga Pratama/Ryan Agung Saputra – a pair that had beaten them at the Malaysian Open earlier this year. However, the in-from Koreans blew apart the Indonesians 21-16 21-11. Malaysians Goh V Shem/Tan Wee Kiong stand in their path to the final. The Malaysians were just as impressive in their quarter-final win over Japan’s Kenichi Hayakawa/Hiroyuki Endo.

In the other semi-final, Korea’s Kim Gi Jung/Kim Sa Rang (above) will face No.2 seeds Mohammad Ahsan/Hendra Setiawan.