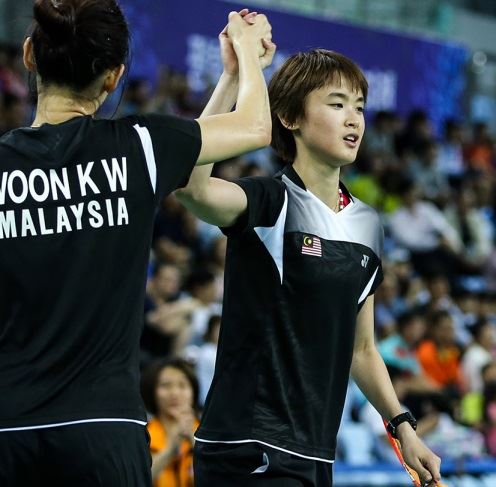 Two big upsets in the opening round of Women’s Doubles were the highlight of yesterday’s action at the Asian Games 2014.

Two-time World champions Yu Yang/Wang Xiaoli of China were shocked in a thriller by Malaysia’s Vivian Hoo/Woon Khe Wei (featured image) in the round of 16. The scale of the upset mirrored that of the fourth seeds, Chang Ye Na/Kim So Yeong (Korea), who were likewise shown the door by Macau’s Wang Rong/Zhang Zhibo. Vivian Hoo and Woon Khe Wei, recently crowned Commonweath Games champions, had lost the only previous match they had played against Yu/Wang. The Malaysians fell behind in the first game but turned it around in the second and held off their opponents in a tight finish to prevail 17-21 21-11 22-20 in close to an hour.

Macau’s Wang Rong (left) and Zhang Zhibo, ranked No.97, were just as impressive. The Macau pair first weathered the opening round challenge of Singapore’s Shinta Mulia Sari/Yao Lei in the morning session and then outgunned the Korean No.4 seeds, ranked 91 places above them, 21-17 21-18. Hoo/Woon face Wang/Zhang for a place in the semi-finals.

Chinese Taipei’s Cheng Wen Hsing/Hsieh Pei Chen were involved in two marathon matches, of which they lost one. Having edged out Hong Kong’s Poon Lok Yan/Chau Hoi Wah 18-21 21-17 25-23 in the opening round, the Chinese Taipei pair once again found themselves in a tense encounter in the second round against Indonesia’s Greysia Polii/Nitya Krishinda Maheswari. This time the Taipei pair were unable to clinch the thriller, 21-17 16-21 25-22.

Malaysia also had good news in the Men’s Doubles. Goh V Shem/Tan Wee Kiong held their nerve in a close finish over No.5 seeds Lee Sheng Mu/Tsai Chia Hsin (Chinese Taipei), 15-21 21-12 22-20 to make the round of 16. However, another Malaysian pair, Hoon Thien How/Tan Boon Heong, handed a walkover to China’s Liu Xiaolong/Qiu Zihan.

Meanwhile, in Women’s Singles, Chinese Taipei’s Tai Tzu Ying (below) overcame a difficult opponent to make the second round. The world No.9 had a 2-0 record against Sayaka Takahashi (No.16), but the match was expected to be a tough affair. The Japanese left-hander edged out Tai in a close first game but the crafty Chinese Taipei player was able to recover in time and take the next two games with a measure of ease, 21-23 21-11 21-15.

The match, which lasted close to an hour, was the longest of all the first round matches in Women’s Singles. There were no surprises in that category, for all the favoured players progressed. Tai will take on Nitchaon Jindapol for a place in the quarter-finals – the Thai had it easy, 21-2 21-9, over Pakistan’s Mahoor Shahzad. Iran’s Soraya Aghaeihajiagha (below) booked her place in the round of 16 with a 21-3 21-5 verdict over Mongolia’s Khulangoo Baatar. Second seed Wang Yihan (China) got past a potentially tricky opponent in Indonesia’s Lindaweni Fanetri in relatively comfortable fashion, 21-16 21-16, and will take on Chinese Taipei’s Pai Hsiao Ma in the second round.