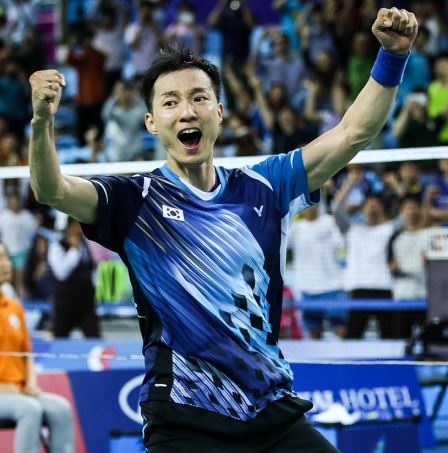 Lee Hyun Il authored one of the great badminton stories by leading Korea to the Asian Games men’s team gold medal over China in a thrilling final today.

The veteran, aged 34, outwitted China’s Gao Huan – a player ten years his junior – in the fifth match of the final and enabled the hosts to claim the title after 12 years.

It was a fairytale script for Lee (featured image) on many counts. Having made a comeback from retirement for the second time, the left-hander made it count in front of his home crowd. Incidentally, he had been a part of the Korean team that had last won the Asian Games gold medal in 2002. China suffered an unexpected setback in the opening singles when World champion Chen Long fell to Son Wan Ho (above). The Korean decimated Chen in the opening game – allowing him just five points – before the world No.2 recovered to make a match of it. After edging through to win the second, Chen again fell behind and Son powered ahead 21-5 22-24 21-14. Just as they had in their semi-final against Malaysia, China persisted with the scratch combination of Xu Chen/Zhang Nan for the first doubles. The Mixed Doubles specialists were up against a pair which has been in tremendous form this season: Lee Yong Dae and Yoo Yeon Seong (above). Xu/Zhang were able to stretch the first game but were no match in the second as Lee/Yoo helped Korea to a 2-0 lead: 23-21 21-13.

China though could turn to the vastly accomplished Lin Dan for the second singles. The five-time World champion, veteran of many a high-pressure battle, nervelessly turned it around for his team with a 21-18 21-15 result over Lee Dong Keun.

Fellow-Olympic champions Cai Yun and Fu Haifeng (right) were underdogs against world No.5 Kim Gi Jung/Kim Sa Rang. Despite not having played together since November 2013, the crafty duo once again rose to the occasion, recovering from a game down to nail the match 19-21 21-18 21-16 and force the decider.

The question in the final match was whether Lee Hyun Il would have the legs to outlast Gao Huan if it turned out to be a long match. The wily Korean however controlled the match brilliantly from start to finish and closed it out in straight games. Displaying a range of strokes that kept Gao scampering around and smashing with power and precision, Lee never relinquished the lead. The ace in his pack was the down-the-line smash with which he caught Gao on his forehand corner time and again as the Chinese failed to anticipate it correctly.

Lee appeared to have sewn up the first game with a 15-8 lead, but a few errors saw Gao nearly catching up with five straight points. Another down-the-line smash from Lee broke the sequence and he was able to take the game.

The second was harder-fought, with both playing steadily and working out openings with patience. Gao kept apace till 10-all but Lee built up a lead after the mid-game break and pressed on to hold five match points. Gao saved three before Lee unleashed a smash to win the tie (21-14 21-18); the veteran was immediately buried under his celebrating teammates who then threw him up in the air in joy.