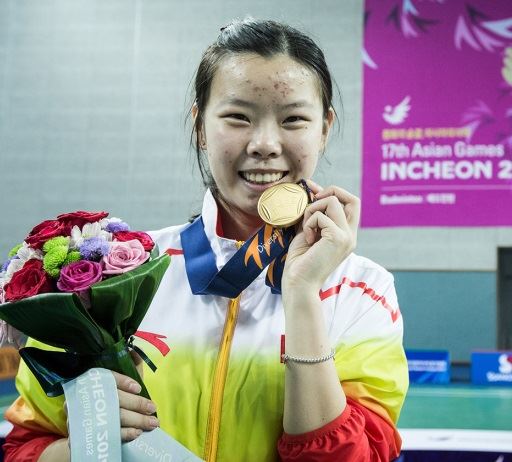 China extended their incredible reign at the Asian Games women’s team event, winning the gold medal for the 10th time in the last 11 competitions.

The defending champions triumphed 3-0 over Korea today, but each match went to three games and the tie lived up to the occasion.

In each of the three matches, Korea won the first game and China had to fight off the deficit. Sung Ji Hyun outgunned Li Xuerui (featured image) in the opening game of their singles contest, but the Olympic champion fought right back and levelled scores with a 19-minute second game win. The third game took marginally longer, but Li eased through in the end: 17-21 21-13 21-16.

Tian Qing/Zhao Yunlei were edged out in the first game by Kim So Yeong/Chang Ye Na. In characteristic style, the Olympic and World champions stormed back, allowing their challengers just seven points in the second game. The third too was a virtual no-contest, with the Chinese taking the match 19-21 21-7 21-12.

Bae Yeon Ju had a mountain to climb against Wang Shixian, for the Korean had never beaten the world No.2 in 12 matches. Of the 12, only the last contest had lasted three games.

Bae started off brilliantly, and with a 21-12 first game, raised some hopes of an upset. However, Wang worked her way back in with her typically relentless style and wore down the Korean. The third game was neck-and-neck before Wang pipped her rival to the post, 12-21 21-16 21-19, to help China (above) retain the title over Korea (below).