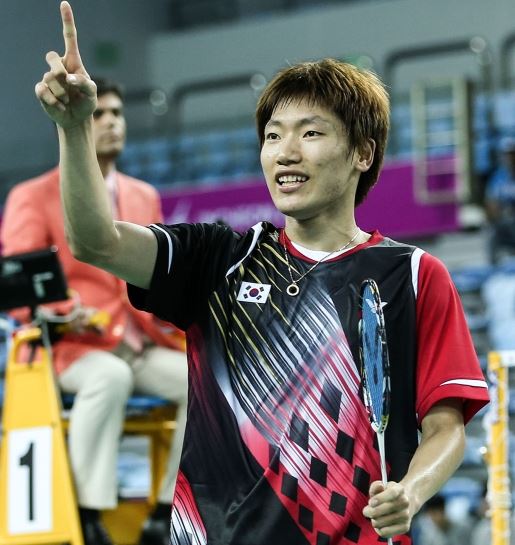 China stayed on course for a third straight men’s team gold medal at the Asian Games, breezing past Malaysia 3-0 in today’s semi-final. Their opponents in tomorrow’s final will be hosts Korea, who were just as comfortable in their semi-final win over Chinese Taipei.

China’s semi-final against Malaysia opened on an absorbing note, for it was a replay of the BWF World Championships final between Chen Long and Lee Chong Wei (left). The Malaysian recovered from his opening game setback to level scores, but he floundered in the third game, enabling Chen to pick up the opening point for China with a 21-17 19-21 21-11 result.

China unveiled a surprise in the first Men’s Doubles by fielding Mixed Doubles specialists Zhang Nan and Xu Chen. The move worked as Tan Boon Heong/Hoon Thien How struggled to contain them after taking the opening game. Xu/Zhang’s 14-21 21-15 21-10 victory set the stage for Lin Dan.

The five-time World champion set a high pace from the start against Chong Wei Feng and closed out the tie with a 21-11 21-12 victory.

Chinese Taipei had an impressive 3-1 result over Indonesia in yesterday’s quarter-final, but they were unable to repeat their heroics against Korea. Chou Tien Chen was shut out in 37 minutes by Son Wan Ho in the opening singles, 21-12 21-17. Lee Yong Dae/Yoo Yeon Seong (below) took even less time to slice apart the challenge of Lee Sheng Mu/Tsai Chia Hsin, 21-10 21-13 in the doubles, before Lee Dong Keun (featured image) wrapped up the tie for Korea beating Hsu Jen Hao 21-12 21-18.