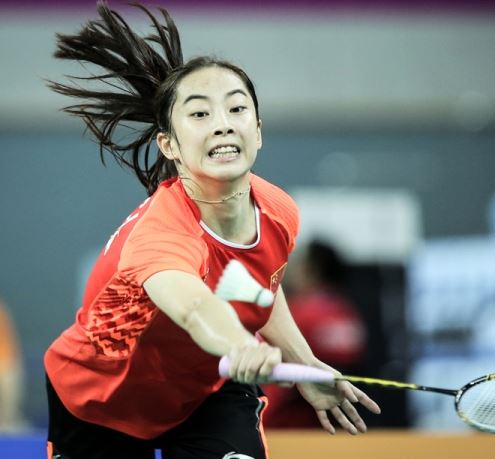 India entered the women’s team semi-finals of the Asian Games 2014 thanks to the scratch combination of Ashwini Ponnappa and PV Sindhu.

The opening day of the badminton event saw a close contest in the women’s team quarter-finals between India and Thailand. With the tie delicately poised at 2-2, the new combination of Ponnappa and Sindhu pulled off a straight-games win over Thailand’s Sapsiree Taerattanachai/Saralee Thoungthongkam to ensure India’s entry into the last-four. India will take on Korea next, while top seeds China face Japan.

While the other women’s team quarter-finals were all one-sided, India’s tie against Thailand see-sawed until the end. Indian icon Saina Nehwal (below) set the ball rolling for her squad, scoring over 2013 World champion Ratchanok Intanon. Nehwal overcame the loss of the second game and held her nerve in a tight finish to wrap up the match 21-15 17-21 21-18 in 67 minutes. However, Thailand stormed right back, with Busanan Ongbumrungpan demolishing PC Thulasi’s challenge in the third singles, 21-12 21-14. Thailand chose to field Kunchala Voravichitchaikul with Porntip Buranaprasertsuk for the first Women’s Doubles match. The Thai pair made it 2-2 with a hard-fought 21-17 18-21 21-16 result over Sikki Reddy/Pradnya Gadre.

It was down to the final match. Ponnappa and Sindhu thwarted Taerattanachai/Thoungthongkam 21-16 21-17 to win the tie for India. Korea, China and Japan made it to the semi-finals with identical 3-0 scores over Chinese Taipei, Malaysia and Indonesia respectively. Korea had it unexpectedly easy over Chinese Taipei, with Sung Ji Hyun beginning the demolition job in the first singles match over Tai Tzu Ying 21-16 21-13. Kim So Yeoung/Chang Ye Na made it 2-0 (21-13 21-19 over Cheng Wen Hsing/Lai Chia Wen) in the doubles before Bae Yeon Ju closed it out beating Pai Hsiao Ma 21-8 21-18.

Indonesia would have considered themselves unlucky to fall 0-3 to Japan as they had their chances in two matches. Minatsu Mitani gave Japan the lead beating Lindaweni Fanetri 19-21 23-21 21-12 in the opening singles. Greysia Polii/ Nitya Krishinda Maheswari came close to making it 1-all for Indonesia but failed narrowly as they lost to Ayaka Takahashi/Misaki Matsutomo 21-14 18-21 21-19 in the doubles. Sayaka Takahashi however gave Bellaetrix Manuputty no chance in a 21-18 21-14 rout. Earlier, in the first round, Chinese Taipei struggled past Hong Kong 3-2, while Malaysia, Indonesia and India had 3-0 results over Nepal, Maldives and Macau respectively.

Meanwhile, in the first round of the men’s team event, Thailand were shocked 0-3 by Chinese Taipei. Men’s Singles veteran Boonsak Ponsana failed to give his side a winning start as he was outplayed by Chou Tien Chen 21-16 21-12. Tsai Chia Hsin/Lee Sheng Mu (above) made it 2-0 for Chinese Taipei over Maneepong Jongjit/Nipitphon Puangpuapech, 16-21 21-15 21-14, before Hsu Jen Hao dashed Thailand’s hopes beating Tanongsak Saensomboonsuk 21-15 21-14.

Other first-round action saw Korea beat India 3-0, while Nepal and Hong Kong dished out the same treatment to Macau and Maldives respectively. Tamang Ratna Jit (above) gave Nepal the lead before Bikash Shreshtha and Sajan Krishna Tamrakar closed it out 3-0 over Macau.

The Asian Games got off to a spectacular start on Friday. Badminton legend Park Joo Bong (below; left) featured prominently in the opening ceremony as he was among eight Korean sports heroes who brought in the Olympic Council of Asia flag after the Games were declared open.