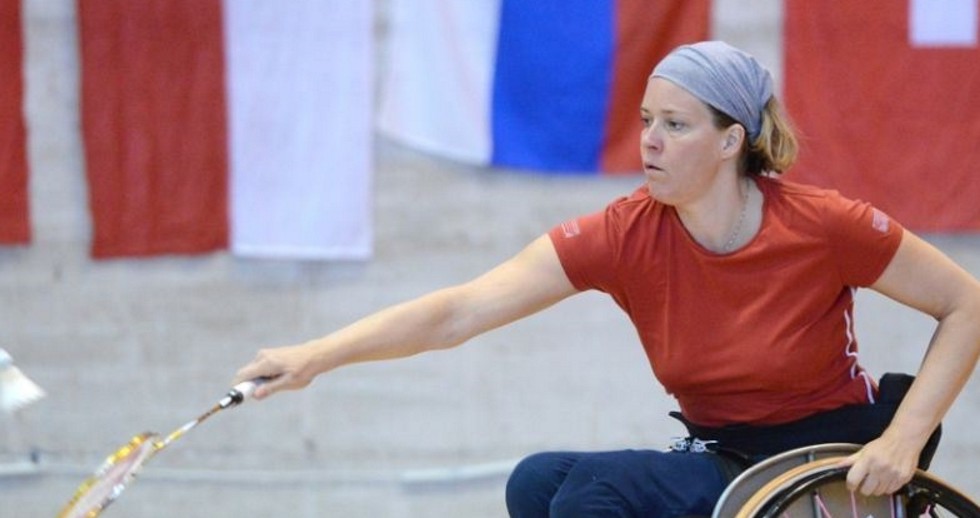 The top seed in WH 1 Women’s Singles, Suter-Erath of Switzerland (featured image) beat Germany’s Valeska Knoblauch, 21-9 21-5, in last Sunday’s final while also recording victories in Mixed Doubles and Women’s Doubles to be the outstanding competitor of the four-day tournament in Murcia, Spain. In WH 1-2 Women’s Doubles she and compatriot, Sonja Haesler, wrested top honours. Again it was Knoblauch – partnered by German team-mate, Elke Rongen – who was in Suter-Erath’s way but the Swiss pair prevailed, 21-17 18-21 21-12. Ironically, Suter-Erath and Haesler were on opposing sides of the net for the finale of the WH 1-2 Mixed Doubles. Haesler and France’s David Toupé lost 21-15 21-8 to Suter-Erath and Rooke.

Englishman Rooke’s other success came in WH 2 Men’s Singles as he cruised past Francois Nalborczyk of France, 21-9 21-6. Rooke capped a satisfying meet with a silver medal in the WH 1-2 Men’s Doubles as he and Turkey’s Avni Kertmen fell 21-11 21-13 to Toupé and Thomas Wandschneider of Germany (below). Wandschneider battled Toupé for the WH1 Men’s Singles title and, in a marathon one hour and 17 minutes, emerged victorious: 20-22 21-12 21-15. Emine Seckin got the better of her Turkish countrywoman Narin Uluc in WH2 Women’s Singles – 21-10 21-7 to the top seed.

In the standing classes, Norway’s Helle Sofie Sagoy (below) marked her country’s maiden participation in the championships with two gold medals. In SU 5 Women’s Singles, she beat Denmark’s Julie Thrane, 21-17 21-13, and partnered England’s Bobby Griffin to glory in the SL 3-SU 5 Mixed Doubles. Again it was Thrane who lost out as she and Daniel Bethell (England) were defeated 21-16 23-21. The latter, however, won the SL3 Men’s Singles final, ousting No.2 seed, Simon Cruz Mondejar of Spain, 21-11 21-14. Mondejar in turn teamed up with Germany’s Jan-Niklas Pott to claim the SL3-SL4 Men’s Doubles 21-13 21-12 over Daniel Lee (England) and Colin Leslie (Scotland). Another notable winner was Turkey’s Ilker Tuzcu who took home two gold medals. The No.2 seed beat top seed Bartlomiej Mroz of Poland in the SU 5 Men’s Singles showdown (21-18 21-14) after having won the SU 5 Doubles (mixed-gender event) with Mroz. They brushed aside Eyal Bechar of Israel and Frenchman Colin Kerouanton, 21-14 21-14. Held at the High Performance Center, the championships have been hailed a success which showcased a competitively high standard of play. Featuring 104 athletes from 19 nations with three newcomers – Finland, Norway and Serbia – the tournament underlined that para-badminton is moving in the right direction and appealing to more fans globally.

“The championships were a huge success. The level of play exceeded all expectations and the number of new countries participating and new champions crowned shows how far para-badminton has come as a truly competitive and entertaining sport,” said Championship Director, Carmen Martinez Villanueva.

A noteworthy element was that the hosts (Physical Disability Sports Federation – Murcia) showed a genuine desire to create a truly accessible event with the High Performance Center in Los Alcazares being specifically renovated to cater to para-sport requirements. They were well supported by major contributing partners, the Spanish Badminton Federation and the Spanish Federation of Sports for the Physically Disabled.

“This is a great step on their part which ensures para-badminton tournaments can be held in Spain, to the appropriate standards, for many years to come,” noted BWF Vice-President – Para-Badminton, Paul Kurzo, who attended the championships.

The classification process categorises players according to their disabilities and to ensure fairness, depending on minimal impairment for a particular class/group. In para-badminton, there are six sport classes: