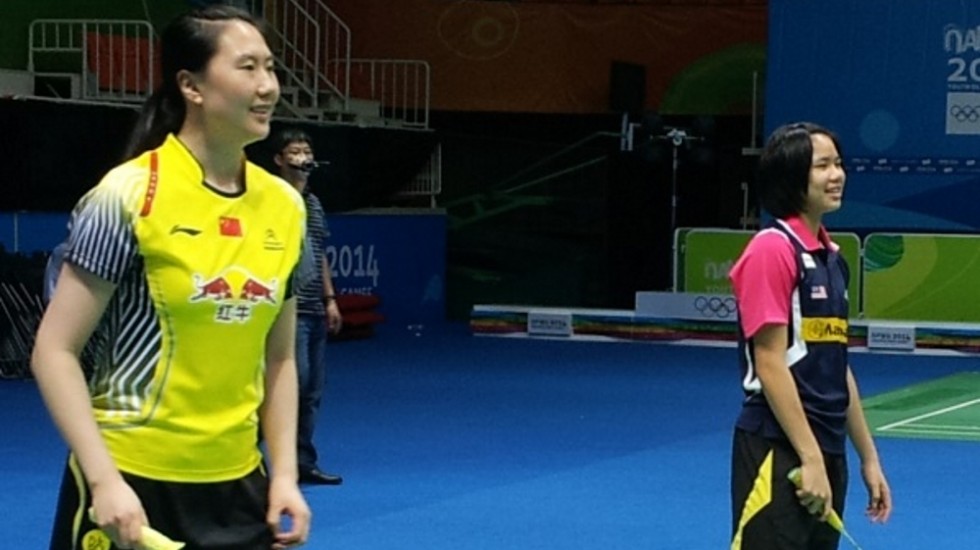 A festive spirit pervaded the air on the final day of BWF’s Sports Initiation Programme during the Youth Olympic Games 2014 last week. The Programme culminated with Athlete Role Model (ARM) Nathan Robertson and former Chinese internationals Lu Lan (featured image; left) and Cheng Shu answering questions from YOG participants and engaging in fun games with them last Saturday. Other sessions earlier in the week consisted of Robertson and fellow-ARM Cheng Wen Hsing showing groups of children from Nanjing’s sports schools around the venue, signing autographs, and playing fun games with the public at an outdoor court.

On Saturday, 45 badminton players who had participated in the Youth Olympic Games and a group of students from Nanjing Badminton School turned up for a Q&A session with Robertson and Lu Lan. Among the questions asked was whether a professional badminton career would interfere with studies.

Both Lu Lan and Robertson (above; left) agreed that a sporting career should not be entirely at the cost of getting an education.

“It’s important to have the right balance,” said Lu Lan, who is pursuing a Post Graduate degree in Sports Management after her retirement from competitive badminton.

The Q&A session was followed by group activity. All the participants were divided into four groups and they competed in fun games, such as three-a-side and ‘touch-and-go’. The aim of the exercise was to provide an opportunity for the school kids to interact with the YOG participants, ARMs and China’s former stars.

The fun activity encapsulated the spirit of the Youth Olympic Games as an event in which friendship and sport transcended national boundaries. Each group had a mix of players from all over the world and they hit it off as though they had known each other previously. Robertson and Lu Lan too were happy to play the fun games with the youngsters.

“This is designed around fun and interacting with the local sports school so they have a chance to play with the YOG players,” said Robertson. “We had different games. It was really good fun. You can see with the players from various countries, they’re really bonding well. This is where they can start, mixing with players from other countries at a young age.”

“The activity has been very successful,” said Lu Lan, World champion in 2009.

“I think it’s a very good idea to have a joint programme between players and students, so all of them get a chance to meet each other. It’s a good opportunity for the young players and should be continued.”