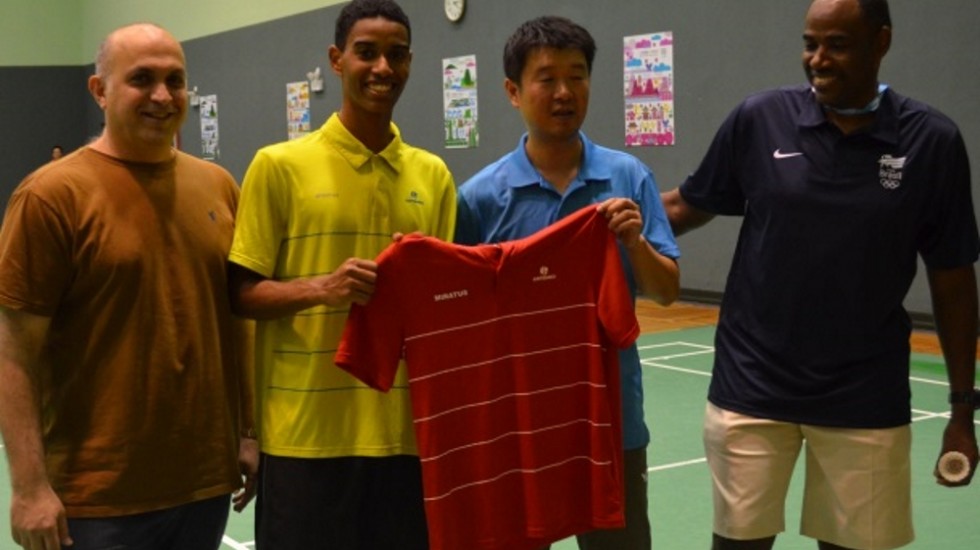 Ygor Coelho de Oliveira will return from the Youth Olympic Games 2014 a vastly improved player thanks to a fortuitous encounter. Brazilian junior international Oliveira (featured image; in yellow T-shirt), who learnt most of his badminton at his coach Sebastiao Dias de Oliveira’s badminton hall in a Rio favela (low-income neighbourhood), had expressed a desire to train under a Chinese coach on the sidelines of the Youth Olympic Games 2014 in Nanjing. Ygor Oliveira could barely believe his luck as some intermediaries helped arrange an hour-long session under none other than former World champion Sun Jun, now a coach in Jiangsu province.

For most of the session last week, Ygor Oliveira had a broad grin. With the meticulousness of a surgeon, Sun Jun dissected his game and suggested simple ways of improving his technique.

“Do not snap your wrist when you play the drop shot,” instructed Sun Jun, offering a demonstration. The effect on Oliveira’s shot was dramatic: he barely made a mistake when he followed Sun’s advice.

After watching a short video of Oliveira’s match against World Junior champion Lin Gui Pu of China (which the Brazilian lost 21-19 21-17), Sun Jun (below) offered a few more suggestions on improving his movement, anticipation, smash and net shots. strokes and movement,” Ygor Oliveira said after the session. “Everything that I learnt was new. It was new even for my coach.”

Coach Sebastiao Oliveira was so impressed that he stated he too wished to become Sun Jun’s student.

“We have to learn new ways of playing badminton,” he told a friend, who translated the Portuguese into English, which in turn was relayed into Mandarin by a helpful Chinese mediaperson. “Coming to China was the most important thing for us. It’s an opportunity to learn and teach other students in Brazil. I knew I was coming to the temple of badminton.”

Initially, Sebastiao Oliveira had decided to build a swimming pool in the favela to provide a useful distraction for the kids. As a child who grew up watching many of his classmates turn to drugs, Oliveira decided that he would use sport to reach out to children. Swimming had helped him avoid the fate that befell many of his friends. While he was contemplating building the pool, he met an Italian who taught him badminton, a sport he had never seen before.

“Around 200 children play at the hall. I have eleven kids who have become champions at various competitions. Those kids receive money from the government to train. Badminton is transforming their lives and also my life because I have a chance to travel and know many people. It is a wonderful way to transform lives.”

Sun Jun, World champion in 1999, hoped his session would help Ygor Oliveira become a better player. “You are the top player in Brazil and representing your country around the world. It’s my pleasure to be of help,” Sun said through the translator.

With Ygor Oliveira’s eyes set on the Rio Olympics at home in 2016, he couldn’t have asked for more timely intervention.