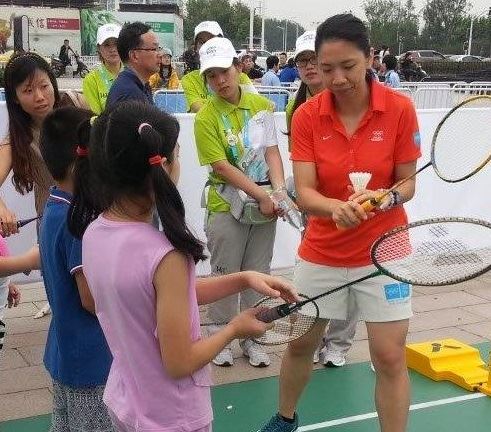 This was among several activities that are part of BWF’s Sports Initiation Programme run in conjunction with the Youth Olympic Games for the first time. The Celebration Site was set up by the Nanjing Youth Olympic Games Organising Committee’s Culture and Education Department to highlight the various sports at the Games. The public was invited to watch students from No.12 Nanjing Middle School going through training routines on a court that was set up on an open site.

The role of the Athlete Role Model (ARM) is to support, mentor and offer advice to the young athletes participating at the Games. Robertson and Cheng are among 37 ARMs at the Games in Nanjing. Former England international Robertson and Cheng (BWF home page), an active player for Chinese Taipei, conducted a mini coaching session and played a few matches with the students (above). They spoke to the enthusiastic students, answered questions about professional badminton and signed autographs.

A prominent visitor to the Celebration Site was 2001 World Trampoline Champion Nuno Merino, who played a friendly game with Cheng.

BWF’s Shuttle Time videos were displayed on a big screen (below) and Shuttle Time flyers (translated into Mandarin) were distributed at the site. Activities in the Sports Initiation Programme included visits by the two ARMs to Nanjing Sports Institute, venue of the badminton competition. Cheng visited the venue on the opening day to interact with two groups of school children, play friendly games and sign autographs.

Cheng and Robertson also visited the venue today and interacted with the players. “I’m surprised by the scale of the Youth Olympics,” said Robertson. “Yesterday there were a lot of children, which is good, although it was windy outside.”

“I’m so happy I could come here,” said Cheng. “The experience yesterday was special. I taught some kids to play badminton. I hope they can continue to play, stay happy and healthy. It’s the first time I’m at a Games without having to play; I can go around, meet people and so on. It was wonderful to interact with young players. I have also learnt a lot by meeting other ARMs.”