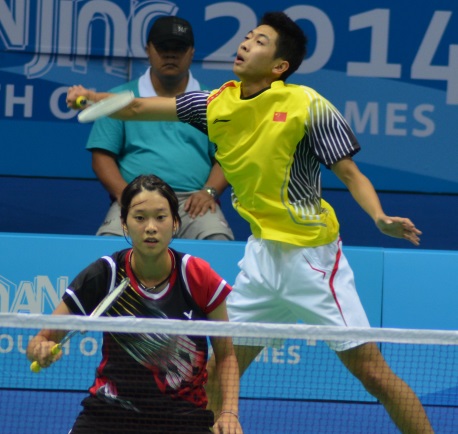 Badminton broke new ground at the Youth Olympic Games today with the celebration of a transnational spirit in Mixed Doubles.

The talking point of the opening day was the final session, in which singles players of different nationalities paired up for Mixed Doubles. This format, held for the first time, was a hit with the participants, coaches and spectators.

Alida Chen (Netherlands), who won her opening Group A match with Andraz Krapez (Slovenia), said she had fun playing with a new partner from another country.

“In the beginning it was weird, but after we settled down we could communicate well,” she said. “We’d practised together once and that helped.”

Her coach Robbie Kneefil added that there was an atmosphere of friendliness in the Mixed Doubles.

“This is special; it is good for the Olympic spirit,” Kneefil said. “We practised with her Slovenian partner yesterday and we could make a good connection. As a coach, I offered my suggestions to him too. This will lead to greater friendship among participants. I think the players are looking at this as a fun event and treating this in a friendly spirit, while in the singles there is greater pressure to perform.”

Among the pairs that got off to a sound start were Ruslan Sarsekenov (Ukraine)/Akane Yamaguchi (Japan); China’s Lin Gui Pu and Korea’s Kim Ga Eun (featured image); Mek Narongrit (Thailand)/Qin Jinjing (China); Dragoslav Petrovic (Serbia)/Liang Xiaoyu (Singapore) and Dipesh Dhami (Nepal)/Busanan Ongbumrungpan (Thailand). With most of these pairs playing together for the first time, the players looked tentative at times, but for the most part they appeared enthusiastic and keen to help each other. Earlier, two upsets in Women’s Singles caused a stir in the day’s proceedings.

Hendahewa, ranked No.59 to Blichfeldt’s No.11, kept Blichfeldt under pressure throughout with her retrieving abilities. The Dane grew increasingly frustrated as Hendahewa’s sharp strokes found their mark with accuracy and the Sri Lankan eased to a 21-18 21-15 win in Group A.

“This is my best result,” Hendahewa said. “The experience of playing in the Commonwealth Games recently helped a lot. My next match is against Akane (Yamaguchi). She’s very experienced and I just have to try my best.”

Qin Jinjing’s loss in Group C to Lee Chia Hsin was just as big a surprise. A semi-finalist at the World Junior Championships, the ¾ seed lost a close first game and then was totally outclassed in the second, 21-19 21-13.

Qin’s compatriot in Men’s Singles and title favourite Lin Gui Pu struggled in his Group H opener against Chinese Taipei’s Lu Chia Hung. Lin started strongly and appeared to be coasting to an easy victory, but got erratic when holding a lead in the second. The second seed sprayed his shots wide of the lines, helping his opponent equalise at a game apiece.

However, the World Junior champion fired himself up once more in the decider and shot off to a 7-0 lead and even though Lu staged a belated challenge, Lin overcame his nerves at the end to seal the win: 21-15 16-21 21-15.

Compatriot and top seed Shi Yuqi got a walkover in his Group A opener, while other strong contenders, like Vietnam’s Pham Cao Cuong (above), Malaysia’s Cheam June Wei, Japan’s Kanta Tsuneyama and Hong Kong’s Lee Cheuk Yiu cruised through in straight games.