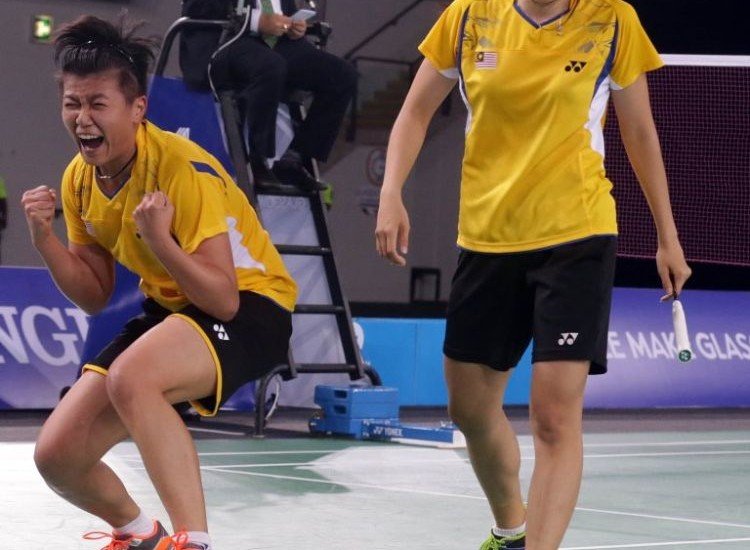 For the first time since 1986, a country other than Malaysia will win the Men’s Singles gold medal at the Commonwealth Games. the coveted title since the 1990 Commonwealth Games when Rashid Sidek – now Malaysia’s head badminton coach – ascended to the podium’s top spot in Auckland, New Zealand. Malaysia’s other quarter-finalist, Daren Liew, also perished to an Indian rival. The last non-Malaysian Men’s Singles champion was England’s Steve Baddeley in 1986 and ironically those Games were hosted in another Scottish city, Edinburgh.

Having impressed in the Mixed Team competition and moved through the individual draw without incident until the quarter-final, Chong – shouldering his country’s ambitions in the absence of defending champion Lee Chong Wei – started as favourite in his match. However, with nothing to lose, Gurusaidutt (left) held his nerve to complete the upset, 21-15 8-21 21-17, after Chong rebounded superbly in the second game and seemed on course for victory.

The outcome, which stunned Malaysian fans inside the Emirates Arena in Glasgow, sees 24-year-old Gurusaidutt progressing to today’s semi-final versus Singapore’s Derek Wong. The latter also won the first and third games, en route to beating another Indian, Kidambi Srikanth, 21-10 12-21 21-12.

India will certainly fancy their chances of medals in this event with two players in the final four as No.2 seed, Kashyap Parupalli, booked an appointment with England’s Rajiv Ouseph for the other place in the final. Parupalli comfortably dismissed Liew 21-13 21-14 while Ouseph took care of business – 21-14 21-7 –

There were no shockers in Women’s Singles as the top seeds advanced to today’s action. India’s PV Sindhu was a polished winner, 21-10 21-9, versus Anna Rankin of New Zealand. At the other end of the draw, hometown girl Kirsty Gilmour (above) had the same score in reverse (21-9 21-10) against another New Zealander, Michelle Chan. Gilmour faces Malaysian, Tee Jing Yi, in the semi-finals while 19-year-old Sindhu seeks to avenge her loss in the Mixed Team competition to Canada’s Michelle Li. The latter defeated Sarah Walker of England (21-18 21-18) and Tee showed her resilience with an 18-21 21-19 21-19 triumph against India’s PC Thulasi. The Malaysian said she “fought hard for every point” because she knew Chong Wei Feng lost his match and she wanted to make sure her nation was represented in the Commonwealth singles semi-finals. In the doubles, the highlight of today will surely be the showdown between seasoned Mixed Doubles campaigners, Chris and Gabrielle Adcock of England (above; left) and their Scottish arch-rivals, Robert Blair and Imogen Bankier. Both pairs won in straight games yesterday to set up the clash that all spectators have been anticipating – the Best of Britain! The Adcocks will also be in the Men’s and Women’s Doubles semi-finals respectively. Their team-mate Chris Langridge is also in two semi-finals: Men’s Doubles with Peter Mills (above; right) and Mixed Doubles with Heather Olver.

Elsewhere, Lai Pei Jing has proven the unsung heroine of Malaysia’s squad with a number of gritty wins in Mixed and Women’s Doubles. In tandem with Chan Peng Soon, she again defied the odds to reach the Mixed Doubles semi-finals; clawing back from 15-18 down in the third game versus the No.2 seeds – Danny Chrisnanta and Vanessa Neo of Singapore – to snatch victory: 21-8 17-21 21-19. Lai also featured in a Women’s Doubles thriller with Lim Yin Loo (featured image); again breaking Singaporean hearts as they scraped home 19-21 22-20 21-19 against Shinta Mulia Sari and Yao Lei.

Christnanta (below) can take some solace from his Men’s Doubles exploits which have seen him and Chayut Triyachart advance to the semi-finals.