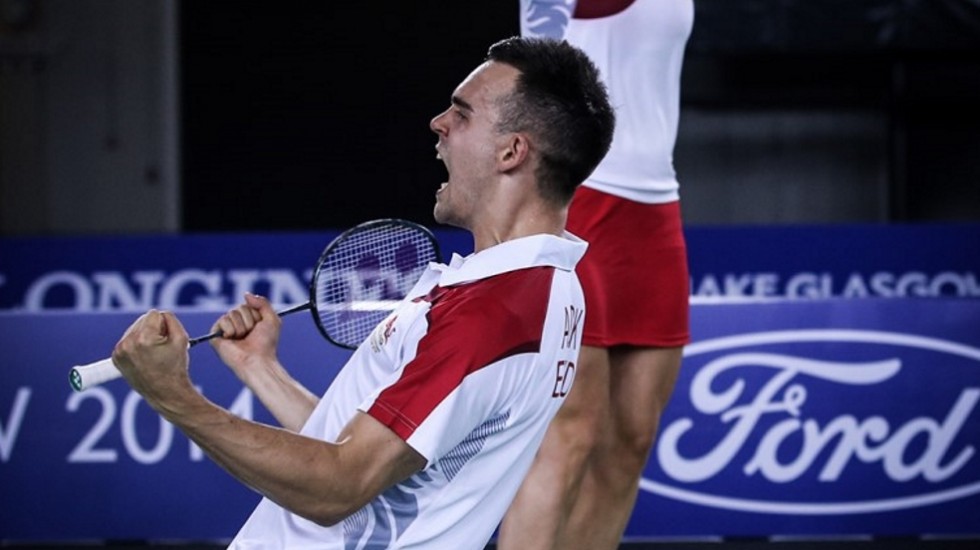 The quest for individual badminton glory at the 2014 Commonwealth Games kicks into high gear today with the rounds of 32 taking place in all five categories at the Emirates Arena.

After months and weeks of speculation about which players will steal the limelight in Glasgow, it’s time for the rackets to do the talking as top players such as PV Sindhu of India; England’s Chris and Gabrielle Adcock (featured image); Singaporean duo, Danny Chrisnanta and Chayut Triyachart (below); and Malaysian dynamo, Chong Wei Feng, look to enhance their credentials ahead of next month’s Li-Ning BWF World Championships while bringing more honour to their respective countries.

As usual, Men’s Singles and Women’s Singles will likely grab the biggest headlines and, in the absence of 2010 Games champions Lee Chong Wei (Malaysia) and Saina Nehwal (India) respectively, the responsibility has fallen to their blossoming compatriots to bring back the gold. On the men’s side, Chong Wei Feng will hope for the same good fortune that has seen the illustrious elder statesman of Malaysian badminton ascend to the top of the podium in the last two Commonwealth Games. Having inherited the No. 1 seeding after Lee Chong Wei’s withdrawal and buoyed by his impressive victory over England ace, Rajiv Ouseph, in the Mixed Team final, he will certainly fancy his chances. Chong begins his assault today versus Buwaneka Dullewa of Sri Lanka who beat New Zealand’s Joe Wu (23-21 21-17) in yesterday’s opening salvos.

At the opposite end of the Men’s Singles spectrum, No.2 seed Kashyap Parupalli (left) will want to shrug off memories of India’s 2-3 loss for Mixed Team bronze against Singapore, despite his best efforts. However, his pedigree and years of experience should take him past Dakeil Thorpe of Barbados and into the last 16. Other prominent names in the hunt are Parupalli’s team-mates, Kidambi Srikanth and RV Gurusaidutt as well as Ouseph, Derek Wong (Singapore), Daren Liew (Malaysia) and Sri Lanka’s Niluka Karunaratne.

Meanwhile, Women’s Singles top seed PV Sindhu will have to show steely resolve to withstand home support for No.2 seed Kirsty Gilmour if she is to retain India’s hold on the crown won by Nehwal on home turf in New Delhi four years

ago. The lanky 19-year-old opens her account versus South Africa’s Sandra LeGrange who will no doubt be keeping her sporting motto – “You have to believe in yourself when no-one else does” – in mind as she seeks a sensational upset of Sindhu. Gilmour’s first match is against Australia’s Verdet Kessler who came through 21-3 21-13 against Barbadian, Mariama Eastmond, yesterday. Canada’s Michelle Li (below) – who upset Sindhu in Mixed Team quarter-finals – is also among the ones to watch as are Malaysia’s Tee Jing Yi, Sarah Walker (England) and Singapore’s Liang Xiaoyu. The doubles competitions will also provide great fare for badminton fans as some of the sport’s best battle it out. Malaysia’s promising pair Tan Wee Kiong and Goh V Shem – fresh from integral roles in Malaysia’s defence of its Mixed Team title – are among the top Men’s Doubles contenders, having started with a comfortable 21-18 21-14 victory over Mark Constable and Alexander Hutchings of Jersey. Some players will really have their work cut out for them as they do double duty. Regular BWF World Superseries campaigners Chris Adcock of England and Singapore’s Danny Chrisnanta go for gold in both Men’s and Mixed Doubles while Adcock’s wife and Mixed partner, Gabrielle, also has aspirations of a Women’s Doubles medal with Lauren Smith. Scotland’s Robert Blair will need all the hometown support he can get if he and Imogen Bankier are to prevail in Mixed Doubles while he and Paul Van Rietvelde compete in Men’s Doubles. Bankier is also looking for two medals as she and Gilmour (below) tag-team in Women’s Doubles.