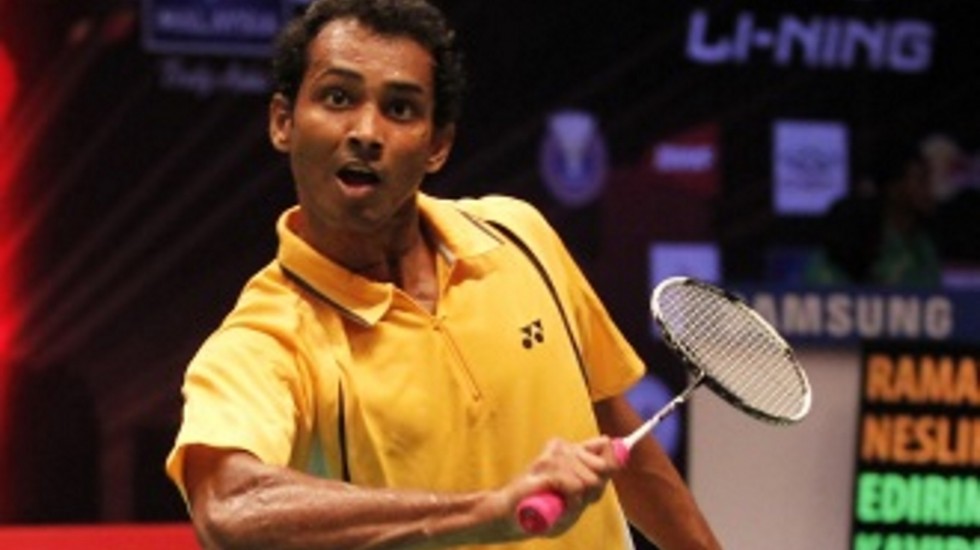 New stars will be crowned singles champions at the Commonwealth Games with the withdrawal of title-holders, Malaysia’s Lee Chong Wei and now Saina Nehwal of India. However, despite their absences – both through injury – their countries could still end up victorious in Men’s and Women’s Singles respectively as the persons to whom top billing has fallen are, as fate would have it, their very team-mates.

When Nehwal faltered at last year’s BWF World Championships in China, it was left to PV Sindhu (left) to secure the honours for India and she did with a bronze. Again in Glasgow, it will be no different as the tenacious 19-year-old, currently the No.2 seed, is now the highest-ranked player in the tournament following her compatriot’s inability to defend the title she won in 2010 on home court in New Delhi.

Nehwal announced her withdrawal today from the 21 July to 4 August multi-sports spectacle and this was later confirmed by the Badminton Association of India (BAI).

“I’m not fully fit and I’ve not had time to train because during the Australian Open I injured my leg and I got blisters on my foot.

“I’m really disappointed because Commonwealth Games is one of the big events. I wanted to go there fully fit and defend my title but there’s too little time to prepare now,” she explained, acknowledging consideration about upcoming tournaments such as the Li-Ning BWF World Championships and the Asian Games as additional factors.

said the decision was made after consultation with BAI and with their agreement. Ironically, Nehwal fought off a spirited challenge from Malaysia’s Wong Mew Choo – now Lee Chong Wei’s wife – to win the gold medal at the last Commonwealth Games. On this occasion, Sindhu, ranked four places below her at No.11, was viewed as her toughest rival. The latter may now breathe a little easier as she contemplates her path to the podium’s top step.

Among other challengers are third seed Kirsty Gilmour, who will attempt to become the first Scot to win the  Women’s Singles title, and fourth seed Michelle Li of Canada. Others expected to perform well are Tee Jing Yi (Malaysia, 5), Thulasi PC (India, 6), Michelle Chan Ky (New Zealand, 7) and Sarah Walker (England, 8). Kate Foo Kune of Mauritius and Verdet Kessler of Australia too will hope to prove a point or two.

Meanwhile, in Men’s Singles, there will still be “Chong Wei” of sorts in the reckoning for Malaysia as the feisty Chong Wei Feng leads his country’s challenge as the No.1 seed, given superstar Lee Chong Wei’s pull-out. The world No.1 withdrew due to a thigh injury, giving up hopes of being the first player to win three Commonwealth Men’s Singles gold medals. Malaysians will be hoping left-handed Chong, who played a key role in his team’s runner-up success at the Thomas Cup in May, can repeat those heroics in Scotland. Former top-ten player Kashyap Parupalli of India is seeded second and will be among those eager to break Malaysia’s stranglehold of the Men’s Singles gold medal, which they have won six successive times from 1990 onwards. Kashyap, bronze medallist in 2010, will hope to emulate the gold medal-winning feat of his predecessors Prakash Padukone (1978) and Syed Modi (1982).

England’s Rajiv Ouseph, who fell at the final hurdle at the last edition, will aim to go one better this time. Ouseph, seeded third, has a shot at becoming only the second Men’s Singles champion from England since Steve Baddeley in 1986.

Sri Lanka’s Niluka Karunaratne (BWF home page) is unseeded but is capable of causing a few upsets. Niluka and his brother Dinuka will fancy their chances of making it to the latter half of the competition. A total of 62 players have been confirmed for the Men’s Singles competition.

Malaysia’s Tan Wee Kiong/Goh V Shem might not be seeded, but they won all their four matches as a pair at the Thomas Cup in May and are among the favourites for the Commonwealth Games title.

With only 30 entries, Women’s Doubles will be held in a 32-draw format. Defending champions Ashwini Ponnappa/Jwala Gutta of India are seeded 3, while 2010 Commonwealth Games runners-up Shinta Mulia Sari/Yao Lei of Singapore are top-seeded. Malaysia’s Vivian Hoo/Woon Khe Wei (2) and England’s Gabrielle Adcock/Lauren Smith (4; below) are the other seeds.