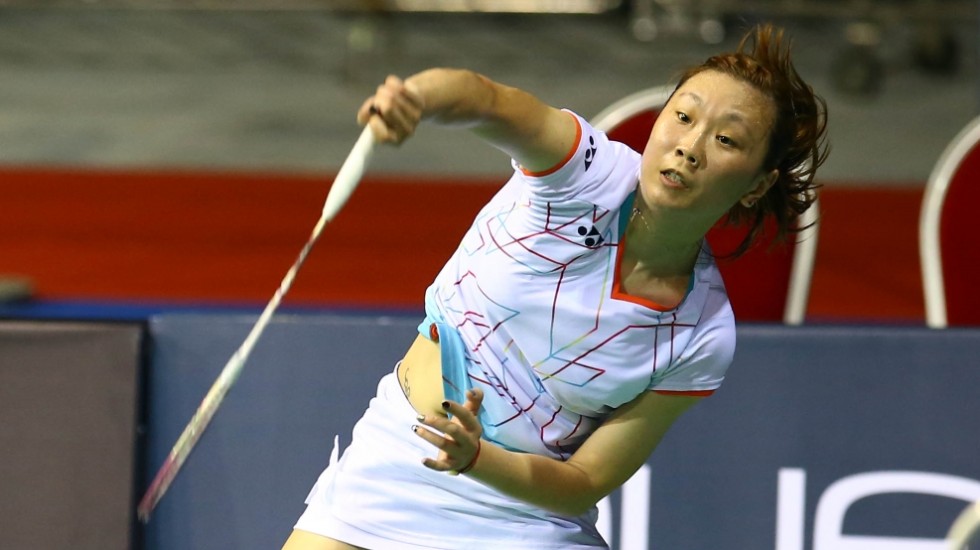 While Vietnam’s Nguyen retained his Men’s Singles title, local hope Zhang made it a memorable day for the home crowd with her victory in Women’s Singles. Indonesia’s Vita Marissa pocketed a double with title wins in Mixed Doubles (with Muhammad Rijal) and Women’s Doubles (with Shendy Puspa Irawati). The surprise of the day was in Men’s Doubles, with world No.4 pair Mathias Boe/Carsten Mogensen of Denmark falling to No.18 pair Maneepong Jongjit/Nipitphon Puangpuapech of Thailand. The Grand Prix Gold event was held at Suffolk County Community College, New York.

Top seed Nguyen (right) had to stave off a tough challenge from Chinese Taipei’s Chou Tien Chen in the final. The Vietnam veteran won by narrow margins in the first and third games to edge past Chou, 21-19 14-21 21-19, which was his third straight three-game victory. Nguyen was extended in the semi-finals by Hong Kong’s Wong Wing Ki (6) before prevailing in 74 minutes, 19-21 21-13 21-14. Second seed Chou, on the other hand, had reached the final without dropping a game. Among the impressive performers in Men’s Singles was Lee Hyun Il. The Korean veteran, who was on a two-tournament winning streak, ran into Wong Wing Ki in the quarter-finals: 21-12 21-17.

USA’s Beiwen Zhang (BWF home page) lived out a dream as she won the biggest event on her home soil, needing just 28 minutes to break the resistance of Japan’s Kana Ito, 21-8 21-17. Zhang had an impressive week, losing just one game – to Japan’s Ayumi Mine in the second round – in her entire campaign.

The upset of the tournament was seen in Women’s Singles, with top seed Nichaon Jindapon of Thailand stumbling in the very first round to a virtually unknown qualifier. Top seed and No.12 Jindapon, semi-finalist at the recent BCA Indonesia Open, was overwhelming favourite against a player ranked 927 places below her, Ayako Sakuramoto of Japan. Jindapon had a comfortable first game, but the Japanese edged her out in a tight second game before clinching a thriller, 16-21 23-21 24-22. The final game saw Jindapon save four match points before earning two opportunities of her own to close it out. Sakuramoto, who had survived two qualifying rounds, refused to give in and authored the upset. The Japanese however could not make it past her next opponent, Hong Kong’s Cheung Ngan Yi, in another close three-game match.

The Men’s Doubles final too ran contrary to most expectations. Boe and Mogensen were favourites as they attempted to become the first Danish Men’s Doubles pair since 1999 to take the title, but their Thai opponents had other ideas. The match was evenly poised late in the third game, when Puangpuapech and Jongjit (above) shot ahead from 17-all to close out the contest: 21-17 15-21 21-18.

* In the opening match of the day, Muhammad Rijal and Vita Marissa (right) rode a strong challenge from Thailand’s Jongjit and Sapsiree Taerattanachai as they eked out a 21-16 21-19 result. There was little to separate the two pairs for most of the second game, until Rijal and Marissa surged ahead in the final moments. The unseeded Indonesians had earlier survived tough three-game encounters against Chinese Taipei’s Wang Chi-Lin/Cheng Chi Ya in the second round and Germany’s Max Schwenger/Carla Nelte in the quarter-finals.

* Marissa got her second title as she and Shendy Puspa Irawati (below) needed just 28 minutes to outplay Thailand’s Puttita Supajirakul/Sapsiree Taerattanachai (3) 21-15 21-10 in the Women’s Doubles final. Top seeds Eva Lee/Paula Lynn Obanana could not make much of an impression on their home ground as they fell in the second round to Chinese Taipei’s Chiang Kai Hsin/Wu Fang Chien, 21-11 21-14.