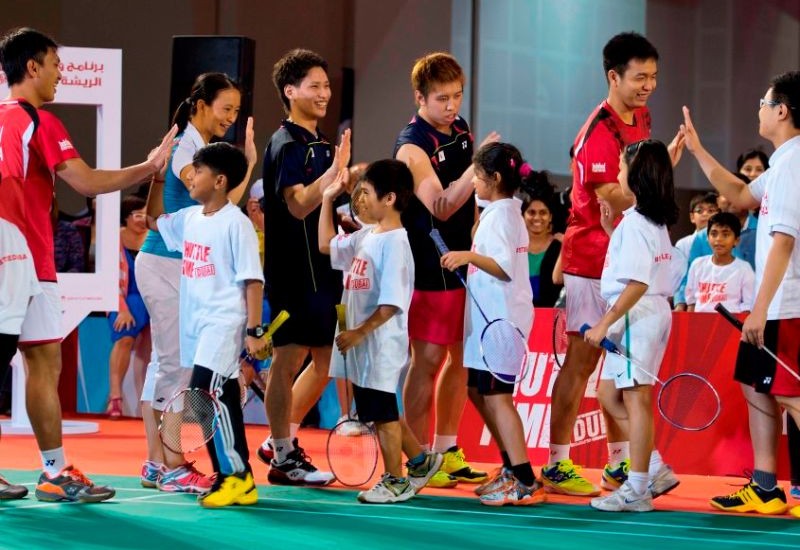 The Badminton World Federation celebrated the launch of Shuttle Time Dubai on Tuesday night with some of the sport’s biggest personalities showing off their skills and engaging in on-court drills with children. Initially targeting 40 schools, Shuttle Time Dubai will train more than 80 teachers to deliver safe and enjoyable badminton lessons to more than 3,000 students, aged eight to 16. Schools will be supplied with all required equipment, including rackets, nets, lesson plans and interactive learning material.

Commenting on the launch, Dr Ahmad Al Sharif, Secretary-General of Dubai Sports Council, said: “Shuttle Time Dubai underlines our ongoing commitment to engage with the local community and to promote sport at a grassroots level. The programme has already enjoyed immense success in over 65 countries across the world and is a pathway to develop promising young athletes into world-class competitors who participate at international events, including World Championships and the Olympic Games.”

BWF Secretary General Thomas Lund, who led a delegation from the international federation to the launch, said BWF is pleased to see this aspect of their partnership with DSC get underway.

“Everyone is understandably excited about the BWF Destination Dubai World Superseries Finals coming here in December, but Shuttle Time is a key feature of this partnership with Dubai Sports Council. It’s the platform through which we can really grow badminton in Dubai and galvanise interest in and passion for the sport.

“Shuttle Time is designed as a fun and engaging introduction for children and its motto is ‘Giving Every Child a Chance to Play’ which is our global vision. BWF’s view is that, children are the roots of our societies, and if we get them involved, then badminton will have the impetus to spread – to parents and through the wider family structure.”

“Shuttle Time Dubai is a fantastic opportunity for people to get involved with a globally-popular sport. It is an incredibly important element of our partnership with the BWF and will also help to raise awareness of the BWF Destination Dubai World Superseries Finals, taking place in Dubai for the first time at the Hamdan Sports Complex in December this year,” said Alastair Ruxton, Commercial and Legal Director at Falcon and Associates.

P.V. Sindhu, the first Indian woman to win a singles medal in the World Championships in 2013, said “In order to become a world-class player it is critical to have a good grassroots scene to help a child develop the necessary skills. It’s great to be a part of the launch and I hope to return to Dubai for the BWF Destination Dubai World Superseries Finals in December to give a good performance and to see how the programme has developed.”

Kenichi Tago, part of the Japanese team who won the Thomas Cup trophy in New Delhi in May, noted: “I began playing badminton at a very young age. It’s exciting because the Shuttle Time Dubai initiative will introduce the sport to children as young as eight years old who may become champions of the future.”

French player Pi Hongyan said “the BWF partnership is good for Dubai and good for badminton”, calling it “an opportunity for players to compete in a dynamic environment and for badminton fans in Dubai to see the sport played at the highest level.”

Mohammad Ahsan and Hendra Setiawan of Indonesia, the reigning Men’s Doubles World champions, expressed their excitement to be in Dubai and highlighting the excellent facilities at Dubai Sports World. Mohammad Ahsan said “There’s a fantastic atmosphere here, everyone should come down and take part.”