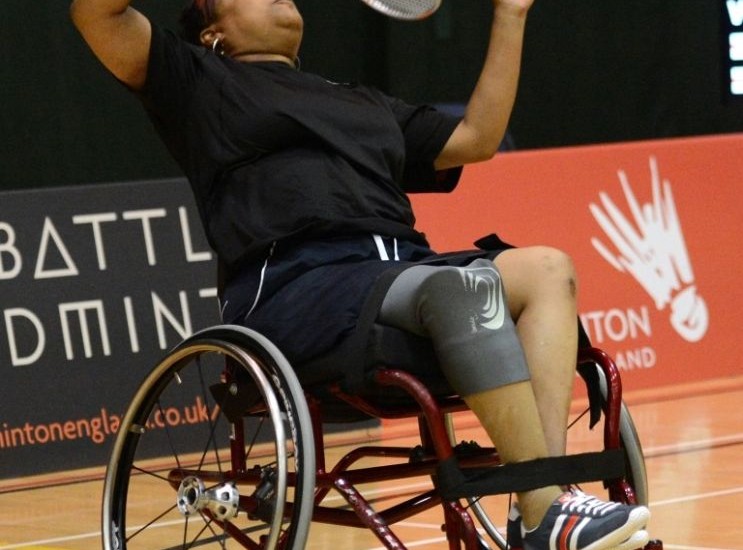 England, Korea, Malaysia and Scotland had plenty to celebrate at the recent England Para-Badminton International at the Sir David Wallace Sports Hall at Loughborough University. Daniel Bethell made up for his doubles defeat with Bobby Griffin in the first final by taking revenge over Malaysia’s Teak Han Liew in the SL3 Men’s Singles final with a crushing 21-4 21-8 win. Teak and Bakri Omar had won Men’s Doubles by beating Bethell and Bobby Griffin, 21-14 21-18. Liek also collected gold with Saaba in the SU5 doubles as the No.2 seeds beat top seeds Bartlomiej Mroz of Poland and Wei Ming Tay of Singapore (above) 21-13 21-18. That meant Malaysia topped the finals day gold rush with four. Not to be outdone Scotland’s Fiona Christie picked up her second gold, following up her WH2 Women’s Singles triumph by partnering Thailand’s Pookkhum Sujirat to success over England’s Fiona Kelly and Swiss star Karin Suter-Erath in the combined WH1 & 2 Women’s Doubles, 21-11 21-14. Sujirat also made it a golden double by beating Suter-Erath in the singles final 21-12 21-18.

England added to Bethell’s gold with Martin Rooke and Suter-Erath teaming up to beat Thailand pair Sujirat and Jakarin Homhaul (21-14 21-14) and there was another gold for the host nation when Krysten Coombs (left), the second seed, defeated team-mate and top seed Andrew Martin 21-14 24-22 in SS6 Men’s Singles. The next big test for many of these competitors is the European Championships in the Spanish city of Murcia in September followed by the Asian Para-Games in Incheon, Korea, in October.

THE GLORY OF PARA-BADMINTON