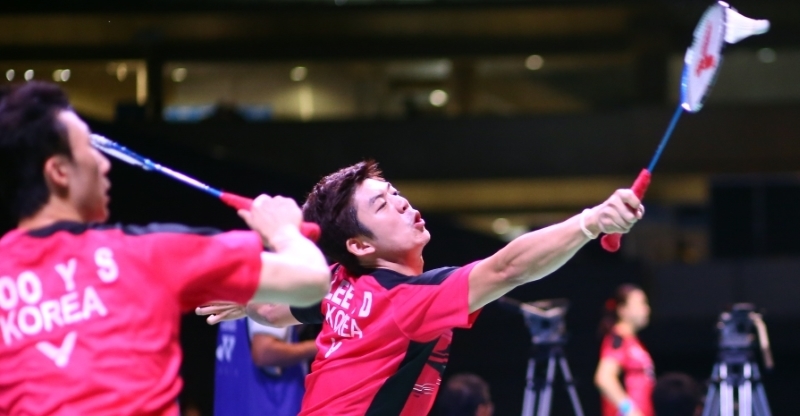 The Men’s Doubles pair from Korea added this rare feat to their already-impressive career records on an eventful final day in Sydney. Among other notable feats on the final day was that World and Olympic Men’s Singles champion Lin Dan (left) of China won his first World Superseries title in over two years. Korea’s Ko Sung Hyun/Kim Ha Na took home their first World Superseries crown in Mixed Doubles.

The Chinese Taipei pair were blown away by the superior defensive abilities of the Koreans and wilted under the pressure. While Lee and Yoo were impenetrable in defence, they had plenty of variations in attack to decimate their opponents. It was only late in the second game that the Taipei pair posed some sort of challenge by varying their counter-attack and drawing level at 16, but that was as far as they could get. Lee hammered a smash between the two to break the deadlock – breaking his string in the process – and the Koreans sealed the issue in the next few minutes. “We’re overjoyed to win three World Superseries in a row but we don’t want to stop there,” said Lee Yong Dae, while his partner added: “We’ve definitely got the BWF World Championships in our sights.”

The Men’s Singles final was a classic battle until midway in the second game, after which Santoso caved in under the mastery of his opponent.

The Indonesian, who had a 1-10 career record against Lin, proved a tenacious customer in the opening game as he fought off deficits of 13-17 and two game points to take the lead. Lin appeared rusty to begin with, but once he warmed up the audience was in for a treat as a full repertoire of shots emerged from both players. Lin frequently punctuated his languid style with spectacular jump smashes while Santoso proved his equal with astounding returns.

Despite the first game loss, Lin upped the intensity, while Santoso began to falter under the stream of near-perfect clears, precision smashes and sharp net shots from his rival. By the third game the Indonesian had given up, allowing Lin to capture the title and power him in his quest to reach the top-8 of the BWF Destination Dubai World Rankings by the year-end. The match was the longest of the day at 75 minutes: 22-24 21-16 21-7.

In the final today, Nehwal was up against left-hander Carolina Marin. Nehwal continued from where she left off in the semi-final win over top seed Wang Shixian (China), her athleticism and attacking abilities wearing Marin down. The Spaniard did sparkle from time to time with her deceptive left-handed shots catching Nehwal off-balance, but overall it was the Indian who dominated from start to finish.

Nehwal’s relentlessness in chasing down Marin’s shots broke the Spaniard’s spirit in the second game. A warning from the umpire and a couple of service faults saw a dip in her focus even as Nehwal grew in confidence. The 21-18 21-11 victory took 43 minutes.

“I didn’t think I’d be playing today because of blisters on my feet,” said the winner.  “I had to ask my physiotherapist at the start of the day whether it would be fine.” * In the opening match, Korea’s Ko Sung Hyun/Kim Ha Na (above) chalked up a memorable first with the Mixed Doubles title. In doing so, they extended the wait of their German opponents Michael Fuchs/Birgit Michels. The Koreans broke away from 16-all in the first game and retained a healthy lead all the way in the second, for a 21-16 21-17 victory. * China’s Tian Qing and Zhao Yunlei (above) packed too many weapons for Ayaka Takahashi/Misaki Matsutomo in the Women’s Doubles final as they emerged winners: 21-15 21-9. The Japanese fought on par in the opening minutes, but eventually the greater resources of Tian and Zhao allowed them to stamp their authority. The Chinese were able to absorb the biggest smashes of Takahashi and Matsutomo and quickly convert defence to attack. The second game was a washout as the Japanese were left clueless on countering the marauding Tian and Zhao from winning rallies at will.