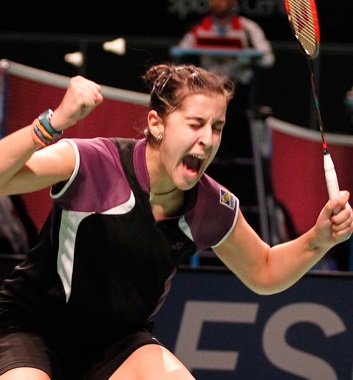 of China in their Mixed Doubles face-off. Xu and Ma would have been expected to pose a strong challenge for the title especially in the absence of top seeds Tontowi Ahmad/Liliyana Natsir, but the Chinese – who were runners-up at last week’s BCA Indonesia Open — went down tamely to the Korean pair, 21-15 21-15.

In the other half, Germany’s Michael Fuchs and Birgit Michels continued to impress, routing Korea’s Lee Yong Dae/Shin Seung Chan 21-18 21-9. The Germans take on Thai veterans Sudket Prapakamol/Saralee Thoungthongkam in the semi-finals.

Meanwhile, in Men’s Singles, defending champion Tian Houwei had his hands full in the opening game of his quarter-final against compatriot Wang Zhengming, who refused to give in despite facing four game points. However, once Tian secured the game 25-23, he surged through with relative ease in the second. His senior compatriot Lin Dan joined him in the semi-finals with a quick demolition job of Korea’s Son Wan Ho (21-17 21-10). The other semi-final will be an all-Indonesian affair, with third seed Tommy Sugiarto taking on veteran Simon Santoso. Sugiarto probably had it easier than he expected in his quarter-final against emerging Japanese prospect Kento Momota (21-18 21-7), while Santoso was similarly untroubled by Hong Kong’s Wong Wing Ki (21-17 21-15). Women’s Singles top seed Wang Shixian (above) did well to close out her match against Chinese Taipei’s Tai Tzu Ying in straight games, after Tai stayed ahead of her for most of the second game. Wang’s 21-15 21-19 win will see her take on another familiar opponent in India’s Saina Nehwal, who powered past Japanese veteran Eriko Hirose 21-18 21-9.

Spain’s Carolina Marin (featured image) reached her first MetLife BWF World Superseries semi-final of 2014 with a 21-17 21-17 result over India’s Sindhu PV. Up next for the Spaniard is Japan’s Yui Hashimoto, who outplayed China’s Han Li 21-18 21-18.