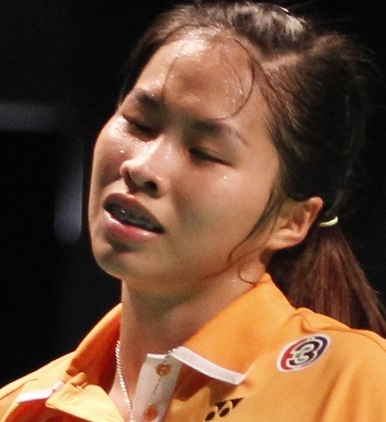 The Thai’s topsy-turvy form this year continued as she followed up her runner-up performance at last week’s BCA Indonesia Open with a second-round loss to China’s Han Li. The Women’s Singles encounter lasted just 36 minutes with the emerging Chinese prospect outclassing the second seed (featured image) 21-14 21-19.

In the quarter-finals, Han will take on Japan’s Yui Hashimoto (above), who surprised her higher-ranked team-mate Sayaka Takahashi, 21-13 21-13.

Intanon’s compatriot Nichaon Jindapon also suffered an early exit after her heroics in Indonesia. Jindapon, a semi-finalist at Jakarta, was no match for eighth seed Sindhu PV of India, 21-13 21-7. Sindhu will met Spain’s Carolina Marin, who had a comfortable win over third seed Sung Ji Hyun (Korea), 21-15 21-17. Japanese veteran Eriko Hirose created a ripple of sorts  in taking down Sung’s compatriot and fourth seed Bae Yeon Ju in a 77-minute match, 18-21 21-18 21-15.

Veteran Mixed Doubles pair Sudket Prapakamol and Saralee Thoungthongkam (below) pulled off one of the exciting wins of the day in a match that lasted 72 minutes. The Thai pair held two match points over Lu Kai/Huang Yaqiong but the Chinese escaped from the brink and surged to a 14-10 lead in the third game. The vast experience of the Thai pair came to their aid and they held off their opponents in the tense closing stages to emerge victorious, 21-18 20-22 21-19.