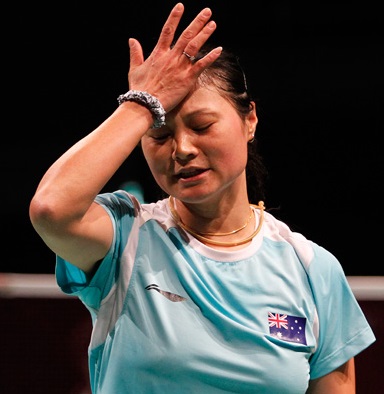 The Mixed Doubles stars from Denmark, who triumphed at the BCA Indonesia Open on Sunday, were ambushed in the first round of The Star Australian Badminton Open 2014 today by Germany’s Michael Fuchs/Birgit Michels (above).

The Danes struggled to get going against their inspired fellow European rivals who have chalked up some impressive results lately. Fuchs and Michels were

runners-up at the Yonex Open Japan two weeks ago and gained the early edge by dominating Fischer and Pedersen in the opening game. Although the Danes forced a decider, the Germans were again on top of their game, building a four-point lead at the changeover and accelerating from there to take the match 21-15 14-21 21-17.

Men’s Singles had some engrossing contests. Malaysia’s Daren Liew had the opportunity to avenge his Thomas Cup loss to Takuma Ueda (below) of Japan and nearly did so. The Malaysian was all over his opponent in the first game – winning it at nine – and kept apace in the second game despite falling behind early. Ueda overcame a 17-18 deficit to edge ahead three times, but each time Liew clawed back level, saving two game points. Ueda finally clinched it on his third game point and rode that momentum to win the encounter: 9-21 23-21 21-15. Ueda’s success gave him a second-round appointment with defending champion China’s Tian Houwei who prevailed 21-19 21-12 over Derek Wong of Singapore.

Both of Denmark’s Men’s Singles contenders fell in the first round. Viktor Axelsen stretched Korea’s Son Wan Ho in a 71-minute tussle, but the fourth-seeded Korean survived, 21-14 19-21 21-15. Japan’s Kento Momota had it easier – 21-19 21-12 – against Axelsen’s compatriot Hans-Kristian Vittinghus. Others progressing to the second round were Chinese superstar Lin Dan, Indonesia’s Tommy Sugiarto (3) and Simon Santoso and Germany’s Marc Zwiebler (8).

While there were no Australians left in Men’s Singles, Women’s Singles saw a couple of the local hopefuls make it to the third day. Verdet Kessler and Tara Pilven got the better of their compatriots Jennifer Tam and Tiffany Ho respectively. Fifth seed Tai Tzu Ying was given a stiff workout by Japanese teenager Akane Yamaguchi but the Chinese Taipei player wriggled past her challenger: 22-20 21-15. Yamada/Kenta Kazuno. The Indonesians, ranked No.10, led for most of the first game but the world No.137 Japanese were able to steal the advantage late in the game. The pattern repeated in the second and the Japanese emerged victorious.

* China’s Luo Ying/Luo Yu were surprisingly taken the distance by Australian pair Renuga Veeran and Tang He Tian (featured image)  in Women’s Doubles. The Australian pair, ranked 29 places below the Chinese, forced a decider but the Luo twins had too many weapons, powering  through, 21-15 15-21 21-13. China’s Huang Yaqiong/Yu Xiaohan (right) were beaten by Japan’s Mami Naito/Shizuka Matsuo, 21-16 21-17.

* Renuga Veeran however had a memorable day in Mixed Doubles with Ross Smith, winning the closest match of the day: 23-21 20-22 24-22. Quite remarkably, their first round against India’s Arun Vishnu/Aparna Balan went into extra points in all three games, with the Indians saving three match points in the second. The closing stage of the match was a tense affair; the Australians saved three match points before closing it out on their first opportunity.