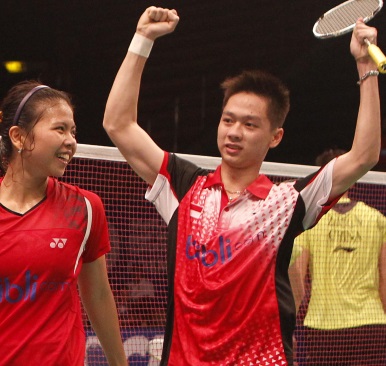 Defending champions Zhang Nan and Zhao Yunlei suffered one of the earliest exits of their career at the BCA Indonesia Open 2014 today. The Chinese Mixed Doubles stars (left), who won the Yonex Open Japan on Sunday, hurtled to a dramatic first round defeat against the scratch combination of Kevin Sanjaya Sukamuljo/Greysia Polii (featured image) of Indonesia. The pair was formed on the eve of the Indonesia Open, a Superseries Premier event in the MetLife BWF World Superseries circuit.

In fact, at a press conference before the start of the tournament, Polii said the pairing was formed to give Sukamuljo experience: “We will play without burden as this will be our debut and our coach has not set a target for us. We will just play and enjoy the matches. The Indonesia Open is a good tournament to gain experience, especially for Kevin.”

The Indonesians survived two three-game qualifying round matches before running into the Chinese.

It all seemed to be going on track for Olympic champions Zhang/Zhao in the first game as they kept a handy lead throughout to take it comfortably. However, spurred on by the energetic

home crowd, Sukamuljo and Polii shocked the Chinese pair in the second game and stayed on par in the see-sawing decider. The Indonesians did well to save a match point before closing it out on their own second opportunity, 15-21 21-18 23-21.

In Women’s Singles, Scotland’s Kirsty Gilmour (above) scored a memorable win over Japan’s Sayaka Takahashi in one of the closest encounters of the first round. Takahashi appeared to have sealed the contest in the third with a 17-11 lead, but the Scot showed great spirit in climbing level and holding two match points. Although Takahashi made it 20-all, Gilmour kept her nerve to claim the winning point: 21-19 19-21 22-20. The other exciting contest in Women’s Singles was between 2011 champion Wang Yihan (China) and India’s Sindhu PV. The Indian challenger had three opportunities of taking the first game but the indefatigable Wang kept in the hunt and clinched it 26-24. It was much easier for her in the second as Sindhu’s belated challenge fell short, with Wang triumphant 26-24 21-17.

In the much-anticipated clash between former and present World Junior champions, the more experienced player prevailed, but only just. Reigning Women’s Singles champion Ratchanok Intanon (Thailand) had her hands full against Japanese prodigy Akane Yamaguchi and needed over an hour to find a way past her: 21-18 19-21 21-18.