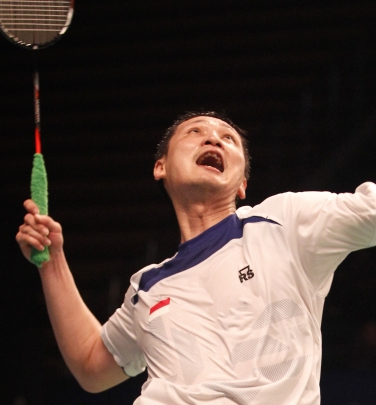 The Indonesian Mixed Doubles stars, current World champions but still searching for their first win on home turf as a pair, nearly blew their first round against in-form Germans Michael Fuchs/Birgit Michels. Having lost the second game, the Indonesians led 16-11 in the decider but the doughty Germans kept narrowing the gap and nearly caught up; Natsir and Ahmad however escaped further damage by closing it out on their second match point: 21-16 18-21 21-19.

Hong Kong Open champions Chris and Gabrielle Adcock too were in a spot of bother after letting go of a handsome lead in the third game. The England duo led Japan’s Kenichi Hayakawa/Misaki Matsutomo 15-7 but then lost the next eight of nine points to find their opponents nearly level. The Adcock couple however kept their noses in front and edged past: 21-17 18-21 21-18. Korea’s Lee Yong Dae (below) and Shin Seung Chan were impeccable in dismantling Indonesia’s Riky Widianto/Puspita Riichi Dili, while Scotland’s Robert Blair and Imogen Bankier nearly pulled off an improbable win over local pair Praveen Jordan/Debby Susanto. The Scots were two match points down but turned it around and had a match point of their own; Jordan and Susanto however escaped their grasp and made it to the second round with a 21-17 19-21 23-21 victory.

The first round in Women’s Singles will see a tantalising clash between World champion Ratchanok Intanon (Thailand) and World Junior champion Akane Yamaguchi (above).  The Japanese, who is in line to match Intanon’s record of three straight world junior titles, qualified in Women’s Singles without stretching herself. Yamaguchi overcame Indonesia’s Yeni Asmarani 21-13 21-16 and Hana Ramadhini 22-20 21-16. The other qualifiers were Adrianti Firdasari, Rusydina Antardayu Riodingin (both Indonesia) and Yang Li Lian (Malaysia). * Imogen Bankier and Kirsty Gilmour were the only non-Indonesian pair to qualify in Women’s Doubles. The Scots beat Indonesia’s Melvira Oklamona/Rosyita Eka Putri Sari 21-12 21-12 to earn a first-round match-up with Korea’s Lee So Hee/Shin Seung Chan.