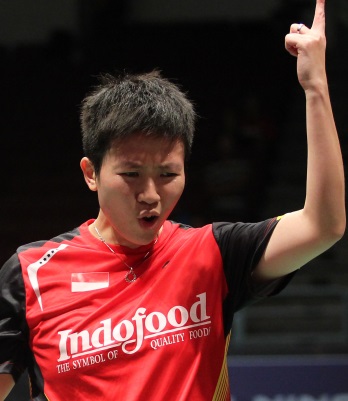 The BCA Indonesia Open 2014 Superseries Premier beginning tomorrow is the seventh event on the 12-tournament calendar and players will be hoping for a strong showing in Jakarta to improve their chances of qualifying for the richly-rewarding Dubai finale. China’s Mixed Doubles stars Zhang Nan and Zhao Yunlei (above), who won the Yonex Open Japan on Sunday, are among those excited at the prospect of playing in Dubai for the first time.

“It’s nice to play badminton in a new location,” said Zhang Nan. “As athletes, we believe it is part of our role to introduce and promote badminton in new destinations like Dubai where badminton is not very popular yet. We will be happy if people there get interested in badminton through this venture.”

Dubai has achieved eminence as a city that hosts world-class sporting events and players are confident badminton can become significantly more popular with the arrival of the World Superseries Finals in the Middle Eastern metropolis. “I have only been in transit in Duba, but I welcome the news that the Destination Dubai World Superseries Finals will be taking place there. It will be good for the promotion of the sport.”

Similarly, China’s Li Xuerui – the two-time defending World Superseries Finals champion – seems keen to seal a hat-trick of titles and get her name in the records as the first-ever Women’s Singles winner in the Destination Dubai spectacle.

“It would be great to play badminton in a new place like Dubai. At this moment I’m not sure if I will make it or not, but I will try to qualify for the year-end event,” declared the 2012 Olympic gold medallist.

One player who is currently outside the top-eight BWF Destination Dubai Rankings is Saina Nehwal (above), who will be hoping her lucky tournament comes to her aid. The Indonesia Open Superseries Premier is the Indian’s fondest event for the famed Istora Senayan stadium has been the scene of some of her most glorious triumphs. Boasting three titles from four finals inside the noisy cauldron, the Women’s Singles star has often stated Jakarta feels like home, with the boisterous fans cheering her on as one of their own.

Over the last year, Nehwal has been a shadow of herself – but a turnaround in form at the Uber Cup last month might just be the break she has been looking for. A strong showing at the Indonesia Open could put her back on track and in the hunt for the big titles.

However, the field is anything but easy. Powerhouses China have all their three top guns: Li Xuerui, Wang Shixian and Wang Yihan, besides younger prospects like Yu Sun and Han Li. Having won the Yonex Open Japan last week, Li Xuerui will be favourite to defend her title in Indonesia. Men’s Singles too has a strong field, led by defending champion Lee Chong Wei (Malaysia), who has a tricky first round opponent in 2008 champion and local star Sony Dwi Kuncoro. Lee’s famed rival Lin Dan (China) has not entered; Lin’s absence will be made up by a strong Chinese squad consisting of Chen Long (2), Du Pengyu (6), Wang Zhengming and Tian Houwei. Others to watch out for include Kenichi Tago (above, left) and Kento Momota (both Japan), Denmark’s Jan O Jorgensen and Indonesia’s Tommy Sugiarto.

* Women’s Doubles will see the return of China’s Yu Yang after she was last seen at the India Open Superseries in April. Third seeds Yu/Wang Xiaoli (right) are expected to pose a strong challenge to top seeds Bao Yixin/Tang Jinhua and Olympic champions Tian Qing/Zhao Yunlei. Bao, who won the event with Cheng Shu last year, has won three World Superseries titles this year with Tang, and it will be interesting to see if the pair can hold off their compatriots and other strong pairs like Misaki Matsutomo/Ayaka Takahashi (Japan) and Christinna Pedersen/Kamilla Rytter Juhl (Denmark).

* Men’s Doubles defending champions and local favourites Mohammad Ahsan and Hendra Setiawan have a tough draw, but will hope for revenge on home turf over Korea’s Lee Yong Dae and Yoo Yeon Seong, who beat them on Sunday at the Yonex Open Japan. The two pairs are in different halves and expected to clash in the final. Another successful campaign would complete Lee’s fairytale comeback from over three months of international exile.

* Indonesian Mixed Doubles star Liliyana Natsir (featured image) last won a home title in 2005 (with Nova Widianto) and will be keen to repeat that feat with Tontowi Ahmad. However, their first round opponents will be Yonex Open Japan’s runners-up Michael Fuchs/Birgit Michels of Germany. Defending champions Zhang Nan/Zhao Yunlei’s first stiff test is expected to be in the semi-finals against Joachim Fischer Nielsen/Christinna Pedersen (Denmark), while Ahmad/Natsir might have to deal with China’s Xu Chen/Ma Jin (3) at the same stage.