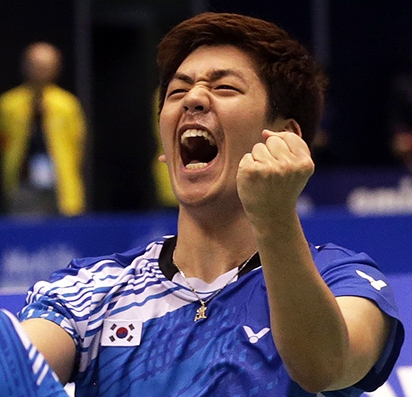 The most emotional of all the winners was possibly Lee Yong Dae. The Koreans dominated the first game as they repulsed Indonesia’s attack effectively, but Ahsan and Setiawan worked their way back in with a different approach in the second game. Opting for a more parallel game, with Setiawan’s immaculate caresses at the net, Ahsan and Setiawan had Lee and Yoo (below) in a knot as they surged to leads of 13-7 and 19-15. At crucial junctures, however, they were guilty of loose shots,

which were seized on by the Koreans who saved two game points to make it 20-all. The Indonesians had three more game points but Lee and Yoo played immaculately under pressure, finally taking the title on their second match point.

World No.1 Lee Chong Wei made it a hat-trick of titles at the Yonex Open Japan, leaving a befuddled Hu Yun in his wake, 21-14 21-12. The Hong Kong player, who had beaten the likes of China’s Chen Long and Denmark’s Jan O Jorgensen in earlier rounds, was destroyed by the intensity of a rival who could do no wrong.

Lee set a high pace at the beginning and but for a brief phase in the second game, the match was his all the way. Hu attempted to curtail Lee’s attacking game by lifting to the backhand corner, but Lee punctured holes with his down-the-line smashes, repeatedly leaping high and winning points with ease. On a few occasions he showed just how difficult it was for Hu to take any points off him, as he dived full length to retrieve sure winners, only to drop the shuttle dead in Hu’s court.

The intensity slightly dipped in the second game and Hu was able to assert himself. With a 12-10 lead, it looked like Hu would give Lee something to think about, but yet again the Malaysian shifted gears. The scorching pace and blistering smashes returned; Hu was so bereft of ideas that he fluffed even the regular returns. With a final crosscourt smash, Lee claimed his seventh straight victory over Hu Yun.

Chinese Taipei’s Tai Tzu Ying dazzled with her skills in the Women’s Singles final but that wasn’t sufficient to breach the formidable defences of Li Xuerui. The Chinese top seed prevailed 21-16 21-6. Tai’s range of deceptive strokes unsettled Li through the early part of the match, but after 15-all, Li shot ahead to take the game. The second game was dominated by the Chinese world No.3, who parried everything that Tai conjured and then fired her own winners when she had worked out an opening. Li won her 10th World Superseries titles from 17 finals and will leapfrog her compatriots Wang Yihan and Wang Shixian to top place on the BWF Destination Dubai Rankings. Tai will move up from ninth spot to sixth. * China’s Zhang Nan and Zhao Yunlei (above) defended their title without much trouble from second-time World Superseries finalists Michael Fuchs/Birgit Michels of Germany, 21-12 21-16. Zhao Yunlei was the standout of the four; not only did she defend Fuchs’s hardest smashes, she was able to fire winners of her own. * Misaki Matsutomo and Ayaka Takahashi (above) claimed their first World Superseries title from five finals after parrying the best efforts of their compatriots Miyuki Maeda and Reika Kakiiwa, 21-13 21-17. With both pairs adept in defence and at long rallies, it was Matsutomo’s sharpness at the net and Takahashi’s heavier smashes that made the difference. The Japanese will move to the top of the BWF Destination Dubai Rankings.