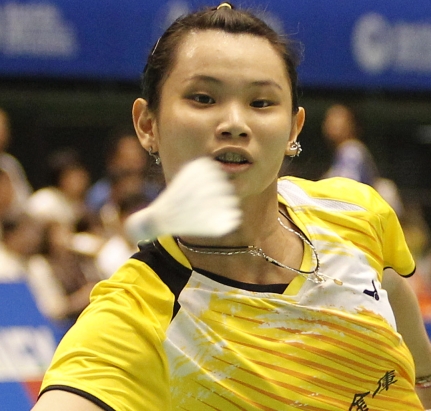 It was the day of the underdog as Hu Yun and Michael Fuchs/Birgit Michels booked their places in the finals at the Yonex Open Japan 2014.

Hong Kong’s Hu, whose last appearance in a The other surprise finalists were Germany’s Fuchs and Michels in Mixed Doubles, as they stormed past fifth seeds Lee Chun Hei/Chau Hoi Wah (Hong Kong) in just 35 minutes. The 21-19 21-10 result gave the Germans a shot at another upset, for they will play defending champions Zhang Nan/Zhao Yunlei (China) tomorrow.

As a full house cheered him on, local hero Kenichi Tago would have hoped to improve his 1-16 career record against defending champion Lee Chong Wei (right). Lee had looked out of sorts in his quarter-final, but against Tago, the world No.1 took flight from the start. Setting a scorching pace and slamming his smashes with great precision, Lee was 8-3 up before Tago gathered his wits and put up a fight. The Japanese showed some of his own explosive stuff, but he was up against an opponent who barely made any mistakes in the first game.

The pace of the game changed in the second and it turned into a battle of high clears and long rallies. While Lee remained his consistent best, Tago alternated between exceptional and ordinary to concede an 8-15 lead. Hunched over by disappointment, Tago made a last brave charge and it helped him nearly catch up with the top seed. At 16-18 it looked like anyone’s game. A successful challenge by Lee on a line call helped him to 19-16 before the net cord came to his favour on match point.

After being outplayed for much of the contest, Sung came to life in the latter part, sending Li scampering with her whippy forehand shots. The momentum appeared to shift her way as she saved one match after another from 14-20, but Li refused to buckle and stepped it up a notch to take it on her eighth match point. * Korea’s Lee Yong Dae/Yoo Yeong Seong (above) avenged their loss to Indonesia’s Angga Pratama/Ryan Agung Saputra earlier this year with a comprehensive 21-16 21-14 score in a Men’s Doubles semi-final. They will face another Indonesian pair, World champions Mohammad Ahsan/Hendra Setiawan, who were just as authoritative over Japan’s Hirokatsu Hashimoto/Noriyasu Hirata: 21-8 21-10.