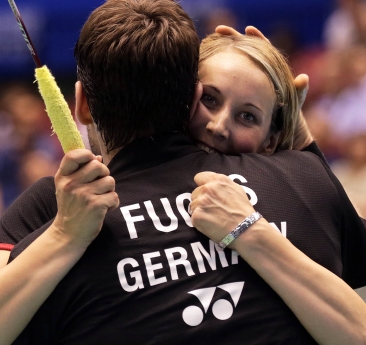 The Yonex Open Japan 2014 witnessed the exit of two big names today as China’s Lin Dan and Chen Long were toppled in the quarter-finals. Sugiarto had a 0-10 record going into the match against Lee, but the Indonesian appeared to be on the verge of breaking the jinx when he led Lee through the early part of the third game. However, Lee steadily closed the gap, and after the mid-game interval, returned to his assured self. Refusing to get harried, Lee kept up the pressure on Sugiarto, whose touch deserted him as his shots frequently went wide of the lines. The 21-15 12-21 21-17 result gave Lee a date with home hope Kenichi Tago, who too survived a three-setter against Hans-Kristian Vittinghus of Denmark, 21-16 16-21 21-13.

On either side of Lee’s victory, two of the biggest names in contemporary badminton crashed out. First it was the turn of second seed Chen Long, who had an unbeaten record (5-0) against Hong Kong’s Hu Yun, but the underdog turned the tables on the second seed late in the second game, and then led all the way in the third to clinch the match 18-21 21-19 21-15.

Sometime later, it was Lin Dan’s turn to taste defeat for the first time in two years. The Olympic and World

champion had last lost a completed match in June 2012 at the Thailand Open to Indonesia’s Sony Dwi Kuncoro. Although Denmark’s Jan O Jorgensen is ranked No.3 on the BWF Destination Dubai Rankings list to his opponent’s No.34, and had indeed beaten him at their last match in January 2012, Lin’s enviable match record meant he was one of the title contenders.

After edging past Lin for the first game, Jorgensen (above) was outplayed in the second. The third was close until mid-way, with Lin showing glimpses of his sublime touch and control to get to within a point of his opponent at 16-17. A smash to Lin’s backhand gave Jorgensen a two-point cushion, and that was all he required to step on the pedal. A wild smash from Lin helped the Dane to 19-16; a net-kill gave him match point, and he needed only one opportunity to convert for a 21-19 13-21 21-16 victory.

After her upset of second seed Wang Yihan yesterday, Sayaka Takahashi (Japan) would have been expected to extend her run at her home event. However, the left-hander had to retire in the second game against sixth seed Tai Tzu Ying (Chinese Taipei) at 21-19 11-6.