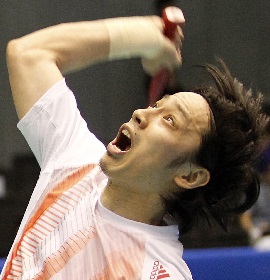 The left-handed Takahashi would scarcely have believed her own good fortune as she came away from the second-round Women’s Singles match against the pre-tournament favourite after an unexpected rout, 21-13 21-16. As the score indicated, it was Takahashi all the way, with Wang (left) unable to get any momentum after 8-all in the first game.

Takahashi will take on Chinese Taipei’s Tai Tzu Ying (6) in the quarter-finals. Among others in the last-eight were Spain’s Carolina Marin (8), Korea’s Sung Ji Hyun (4), China’s Liu Xin and Thailand’s Porntip Buranaprasertsuk (7). Takahashi’s victory salvaged the day for the hosts in Women’s Singles as three of her compatriots – Eriko Hirose, Kana Ito and Sayaka Sato – fell in straight games.

Veteran Hirose had won a solitary game in four previous encounters with top seed Li Xuerui (China) and the story was no different today. After suffering a first-game

whitewash, Hirose showed some pluck as she held the lead for a brief period, but once Li equalised at 10, there was no looking back as she eased through, 21-5 21-16.

Japan did not have a memorable day in Men’s Singles either, with only fourth seed Kenichi Tago making the quarter-finals. Three of his compatriots – Takuma Ueda, Sho Sasaki and Riichi Takeshita – bit the dust, all in straight games. Denmark’s Jan O Jorgensen (3), who quelled Takeshita’s challenge, earned a face-off against World champion Lin Dan (China).

Tago had too many weapons for Sourabh Varma. The Indian had a 1-1 record against Tago going into the match (both the contests had stretched to three games), but was comprehensively beaten by the Japanese today. Unable to create openings and too dependent on a counter-attacking game, Varma was cannon fodder for Tago’s aggressive style. The Indian fell apart in the second game, unable to stretch the rallies and give his in-form opponent anything to worry about. The 21-9 21-6 score was an apt reflection of Tago’s dominance over Varma.

Top seed Lee Chong Wei of Malaysia won a see-saw battle over Marc Zwiebler (above). Having taken the first game 21-13, Lee ran into an inspired spell of play from the German, who despite seeing a four-point lead evaporate, went desperately close to forcing a decider. Zwiebler saved three match points but could not capitalise on four opportunities to extend the contest. Lee finally clinched the match 21-13 28-26 to earn a quarter-final against fifth seed Tommy Sugiarto of Indonesia.