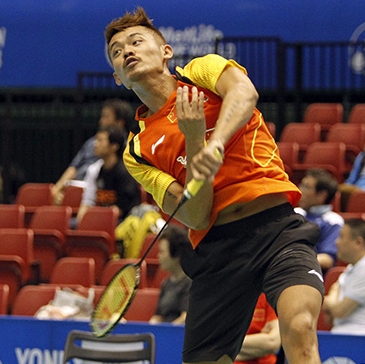 Lin (featured image), whose last appearance at a World Superseries event was at the Yonex All England Open Superseries Premier in March 2012, won both his Men’s Singles qualifying matches to book his first round spot against compatriot Xue Song. The Yonex Open Japan is sixth in the 12-strong World Superseries circuit, which culminates in the BWF Destination Dubai Superseries Finals.

Despite being overwhelming favourite against Japanese youngster Kazumasa Sakai in his opening qualifying round, it wasn’t all one-way traffic for Lin. Sakai surprised him by taking the first game rather easily, and stayed close to Lin in the second game, but the two-time champion kept a slim lead to draw level and stepped it up a notch in the decider to leave Sakai trailing behind: 12-21 21-19 21-7.

In the second round, Lin shrugged off a stubborn challenge from Malaysia’s Daren Liew in the first game before coasting to a 21-18 21-15 victory.

Other Men’s Singles qualifiers included Riichi Takeshita and Kenta Nishimoto (both Japan) and Shih Kuei Chun of Chinese Taipei. Shih will face top seed and defending champion Lee Chong Wei in the first round. With Lin and Lee in opposite halves of the draw, there is a possibility of the two stalwarts meeting in the final.

Meanwhile, World Junior champion Akane Yamaguchi (above) set up an appointment with Olympic champion Li Xuerui in the first round of Women’s Singles. Yamaguchi, the defending champion, powered past compatriot Anna Doi 21-14 21-9 and then survived a tough contest against another Japanese, Yukino Nakai, 21-17 19-21 21-15. Other qualifiers included Ayumi Mine, Haruko Suzuki (both Japan) and Chinese Taipei’s Pai Yu Po. * Indonesia’s Shendy Puspa Irawati and Vita Marissa were the exceptions as they were the only non-Japanese among the four Women’s Doubles qualifiers. The other qualifiers were Miri Ichimaru/Shiho Tanaka, Erika Aman/Haruko Suzuki and Rira Kawashima/Saori Ozaki, who beat Scotland’s Kirsty Gilmour/Imogen Bankier 21-17 25-23.