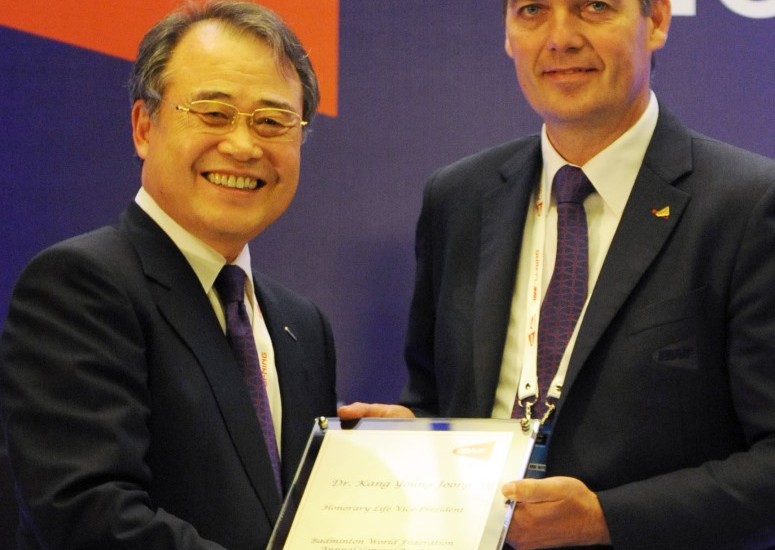 The Badminton World Federation honoured two of its outstanding sons at its weekend meetings and festivities in New Delhi, India. Berg’s countrywoman, Kirsten Larsen (left), copped the Women in Badminton Award for her significant contribution towards the active participation of women in high-performance badminton.

Delegates at BWF’s 75th Annual General Meeting (AGM) on Saturday overwhelming supported the BWF Council’s recommendation that Dr. Kang be rewarded with one of the organisation’s highest tokens of appreciation, having led BWF through its most significant period of growth.

The two-term (2005-2013) president guided the BWF through “unprecedented change” between 2009-2013, heralding “the rise in the status of badminton and the BWF”. This, noted BWF Vice-President – Europe, Gregory Verpoorten, was due to “strong leadership, good governance, key partnerships and a strategic approach under Dr. Kang’s leadership”.

“Dr. Kang’s leadership helped to establish the conditions for best practices and excellence for the sport and the BWF. During the 2009-2013 period, the BWF established its strongest financial position ever…and BWF is now in a position where it is no longer solely dependent on Olympic income for its future,” added Verpoorten, reading Dr. Kang’s citation.

The former BWF president was also lauded for emphasising a transparent, principled and democratic approach to governance, including the abolition of proxy voting and travel-grant support for BWF member associations attending the AGM. He is also credited with introducing translation services at the AGM and providing scholarships for winners of the BWF World Junior Championships.

Addressing the gathering following a prolonged standing ovation (above), the Korean business executive thanked BWF for the honour, noting he tried to listen to the badminton family during his tenure at the helm.

One of his focal points as president, he added, was to enable BWF members to be owners of the international federation and he thanked the membership for its support and participation.

Though having stepped down from office at last year’s AGM, Dr. Kang said he will consider his elevation to Honorary Life Vice President “an order to better serve you (BWF) in the future”. Described as a “doer who just gets on with the task and delivers on or before time”, the unassuming Dane was saluted for more than 40 years of service to the sport at local, national, continental and world levels; holding a wide range of positions in over 28 continuous years as a BWF Council member.

“He has contributed in so many ways to the technical, development and administration sides of badminton and to the governance of the BWF,” highlighted BWF President Poul-Erik Høyer (below; left, making presentation to Berg), acknowledging that his compatiot’s wise counsel has been missed since the latter stood down from re-election last year May. Berg, he told guests, was a technical delegate at the Barcelona 1992 Olympics – the first Summer Games in which badminton featured – and a referee at Sydney 2000; Athens 2004; and London 2012; and the one who could always explain why and how various regulations came into effect.

The honouree said he was “ever so thrilled and grateful to BWF” for such recognition, particularly as it connects him with persons to whom he looked up.

“I knew Herbert Scheele when I was a young man and I had a good relationship with him. When I look at who has received this award, they were all my teachers and mentors in badminton – so it has special significance,” he stated.

Larsen, who was unable to attend the glitzy ceremony in New Delhi, relayed her appreciation via a pre-recorded video message.

Since retiring from her highly successful international badminton career in 1990, she has worked hard to devise ways in which to challenge and develop the mental side of female athletes in high performance badminton. She is interested in how new strategies can improve confidence and performance on court.

The former top player has also been working as a mentor for young female players in the Danish national team, helping them deal with anxiety while developing their dedication to badminton and blending their individual goals with those of their team.

A collaboration between Larsen and Badminton Denmark was published in the respected Danish high-performance magazine “PULS”, providing details on building a competitive advantage by using the mental aspect of badminton. Larsen continues to be a mentor and researcher for young talented women in the Danish athlete pathway – and is seen as a role model for young women aiming to be the world’s best in badminton.