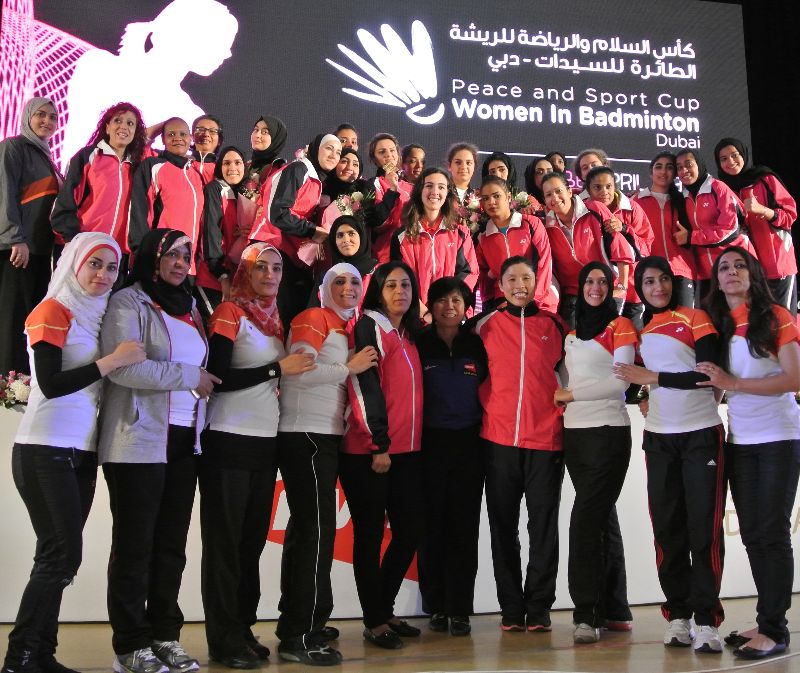 The recent inaugural Peace and Sport Cup – Women in Badminton – Dubai 2014 has been hailed a success by participants and organisers alike and discussions will soon be underway for this event’s second edition.

“It’s been good to have all these players in one place. We will invest more in badminton. We want to keep this event yearly.”

“We hope to make badminton one of the best sports in Dubai and the UAE. We want to create a strong team and build a strong badminton structure based on the needs of our youth in the future,” elaborated Dr. Ahmad, adding that badminton will be promoted as a sport for families.

The Peace and Sport Cup brought together female badminton players, coaches and technical officials from Bahrain, Iraq, Jordan, Lebanon, Morocco, Saudi Arabia, Sudan and hosts, the United Arab Emirates, for a unique Women’s Doubles tournament as well as coaching workshops and training for technical officials. The novelty of the two-day competition was that pairs comprised players of two different nationalities. The overall objective of the 26-30 April forum was to encourage women’s participation in sport and physical activity locally and regionally while fostering cross-cultural goodwill, friendship and peace. It was also envisaged that the competition’s mixed-pairs approach as well as general interaction among participants would positively impact these women from differing backgrounds.

By all accounts that was the case.

“It was great to play with someone from another country. The level of the competition was good,” said Bitari who has been playing badminton for 11 years.

Meanwhile, Mazahreh noted it was “a good feeling to win this special championship for peace and friendship”, especially as it was the first occasion on which the Peace and Sport Cup was being held.

Saudi Arabia’s Mousa was pleased with her runner-up finish as she is not accustomed to competing in doubles, furthermore with a foreign partner. The 20-year-old, who has played badminton for two years, trains daily and watches lots of badminton videos to improve her skills amid limited sporting infrastructure for women in her country.

“The coaching here was great. This is a brilliant idea and I hope it continues,” she added, praising the contribution of Korean women’s badminton coach, Kim Ji Hyun, and two-time Egyptian Olympian in Women’s Singles, Hadia Hosny (regional ambassador for the event), who were selected by BWF to work with the players. “This has been an amazing experience. It’s the first time I’ve been involved in badminton coaching outside of Jordan. This idea of bringing peace and sport together is great. We have had a friendly competition and learnt a lot and improved our skills,” noted Jordan national coach, 27-year-old Dima Ardah.

Noor Alaa, 23, said that after six years as a badminton competitor in Iraq, this was her first course for umpiring as she transitions to being a technical official.

“I can go further in umpiring than I can playing so I decided to switch. This has been an amazing experience and I definitely want to continue. I have made friends from different countries and I have been learning about umpiring.”

“There is a lot of potential here. The participants were very enthusiastic and they want more and more information about badminton. Now they have to go back home and practise what they have learnt here – the proper terminologies and procedures and scoring. They also need better English if they want to go further,” she assessed. President and Founder of Peace and Sport, Dr. Joel Bouzou, stated the Dubai event was a way of creating “cohesion, exchanges and respect” among women of eight nationalities.

“They have built friendships which they will keep…we hope we can grow this. My dream is one day to have diplomats around the athletes talking about sport and other issues which are sometimes difficult to raise in other environments.”

Sport, he pointed out, is “a unique language which has the capacity to bring dialogue between divided communities…we bring communities together through sport…we establish communication where there was no communication”.

Dr. Bouzou applauded the BWF for “understanding what can be done through sport” and for using badminton to promote peace and goodwill among communities.

The Peace and Sport Cup, said BWF Vice-President for Africa, Dagmawit Girmay Berhane, was “an opportunity to make badminton popular in the (Arab) region” and to empower Arab women.

“Badminton is practised here but is not popular in terms of having tournaments. Dubai will host the BWF Destination Dubai World Superseries Finals in December and this was an opportunity for us to promote the sport ahead of that big event,” she explained.

Additionally, it brought together women of similar cultures who face similar issues and concerns in a setting where they could share their experiences about badminton and life.

“They have been using sport to get to know each other and it shows these kinds of events can be used to bring people together,” concluded Berhane who presented prizes at the closing ceremony for the tournament. 5. The Saudi Arabian contingent at the Peace and Sport Cup – Women in Badminton – Dubai 2014.