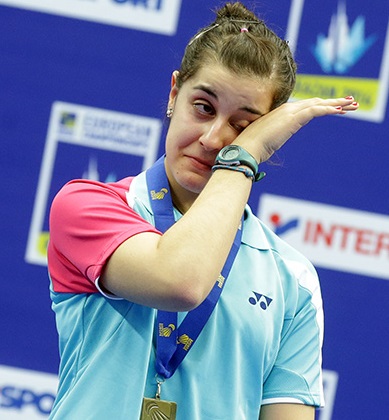 Marin (Left; BWF home page) became the first Spaniard to win the coveted title. After the final point was clinched against Denmark’s Anna Thea Madsen, the left-hander burst into tears and then broke into a wide grin.

The Championships that concluded in the Russian city saw new names being crowned, with only the Women’s Doubles pair of Christinna Pedersen and Kamilla Rytter Juhl defending the title they had won in 2012. European powerhouses Denmark finished their campaign with three titles. The event concluded on a bright note for hosts Russia as local heroes Vladimir Ivanov and Ivan Sozonov capped off their dream run with the Men’s Doubles title, the first for the country in that category.

World No.4 Joachim Fischer Nielsen and Christinna Pedersen were favourites against their Danish compatriots Mads Pieler Kolding and Kamilla Rytter Juhl in the Mixed Doubles final, but the top seeds were pushed all the way. They had two game points in the first but Kolding and Rytter Juhl edged past to take the lead. The top seeds stormed back, reeling off eight points in a row in the second game to take the match to a decider and then kept a narrow lead through the final game, closing it out, 22-24 21-13 21-18. The Men’s Singles final that followed saw top seed Jan O Jorgensen (right), also of Denmark, against England’s Rajiv Ouseph. Jorgensen had been in patchy form through the week, having survived three match points against Germany’s Dieter Domke in the first round and another three-game match against Frenchman Brice Leverdez in the quarter-final. However, the Dane hit peak form in his semi-final win over compatriot Viktor Axelsen and he carried that momentum into the final.

Ouseph took charge early in the first game with nine straight points for a 13-8 lead, but once Jorgensen steadied himself, the lead was steadily chipped away. Jorgensen shot past him in the final stages of the first game and exerted total dominance in the second for a 21-18 21-10 victory, which he celebrated with a few kung-fu kicks.

Carolina Marin was favourite for the Women’s Singles title before the event began. Her opponent, however, was a surprise finalist: Danish teen Anna Thea Madsen. Marin took the first game rather easily but then had a shock in store as Madsen outplayed her in the second. That phase wasn’t to last, with Marin regaining her composure and not allowing Madsen double digits in the deciding game: 21-9 14-21 21-8.

“This victory is for the people of Spain and all the people who have helped me along the way,” Marin told BadmintonEurope.com.

* Christinna Pedersen and Kamilla Rytter Juhl reunited on the same side of the net for the Women’s Doubles final after facing off as adversaries in the Mixed Doubles. The top seeds were comfortable winners over compatriots Marie Roepke/Line Damkjaer Kruse, 21-11 21-11. * Russians Ivanov and Sozonov (above) provided a fitting finale to the event by overwhelming Denmark’s Mads Conrad-Petersen/Mads Pieler Kolding 21-13 21-16 to become the first Russian pair to claim the Men’s Doubles title.