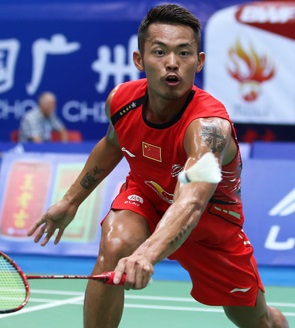 While Lin Dan’s triumph in Men’s Singles might not have surprised many, home fans were in for a treat as local girl Sung Ji Hyun (left) pulled off a big surprise in the Women’s Singles final. Sung won her first major title since the Korea Open of 2013, beating favourite Wang Shixian of China in straight games.

The final day’s honours were split between China and Korea, with two titles each, and Hong Kong, which claimed the Mixed Doubles.

China’s Wang Shixian has been in brilliant form in recent times and few would have bet against her winning a maiden Asian Championships title. The world No.2 has been the player of the season so far, with two Superseries titles and a runner-up position at the Malaysia Open.  She had also won her last two matches against Sung and had a 5-3 edge going into the final. However, the Korean defied recent history with a strong and consistent performance, using her reach and sharp attacking game to dent the top seed. After a close first game, Sung powered through in the second for a 21-19 21-15 victory. The Men’s Singles final see-sawed a bit before Lin Dan (BWF home page) sealed the issue. The two-time champion looked rusty to begin with as Sasaki’s aggressive game paid him dividends. The first game was over quickly and an upset loomed large.

However, Lin expertly changed gears, working his way back with his astonishing defence and precise clears that gave Sasaki no room to attack. With Lin forcing Sasaki to chase the shuttle, the Japanese left-hander began to commit a slew of errors. For most of the second and third games Sasaki was unable to keep the shuttle within the lines, even as Lin calmly directed the play from the centre with unhurried footwork and expert courtcraft.

With a single digit score likely in the third game, Sasaki made a belated charge, throwing himself around to return Lin’s powerful smashes and forcing his opponent into indecisive shots. Lin appeared to waver momentarily as his rival saved one match point after another, coming to within five points, until finally Sasaki smashed into the net for Lin to triumph 14-21 21-9 21-15. This is Lin’s second title win in two weeks, following his victory at the China Masters Grand Prix Gold.

* Earlier, Hong Kong’s Lee Chun Hei and Chau Hoi Wah (above) held off a strong challenge from No.4 seeds Shin Baek Choel/Jang Ye Na of Korea in the Mixed Doubles final. The Hong Kong pair was outplayed in the opening game but found the answers to beat Shin/Jang in the next two: 13-21 21-15 21-15.

* Korea lost a second final when Kim Ha Na/Jung Kyung Eun were edged out by China’s Luo Ying/Luo Yu. Although the match was over in straight games, 21-18 21-18 to the Luo twins, the match stretched for 70 minutes with a number of long rallies. * Shin Baek Choel made up for his loss in the Mixed Doubles final by claiming the Men’s Doubles title with Yoo Yeon Seong (above). The Koreans survived a testing time from China’s Li Junhui/Liu Yuchen in the first game before easing through in the second: 22-20 21-17.