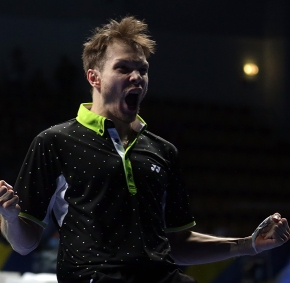 A dramatic upset soured a near-perfect semi-finals day for Denmark at the 2014 Intersport European Championships at Kazan, Russia, yesterday. Local heroes Vladimir Ivanov and Ivan Sozonov (above) were the ones responsible, as they scripted a sensational victory over reigning Men’s Doubles champions Mathias Boe and Carsten Mogensen to become the first Russian pair in 20 years to make the final in that category.

The in-form Danes had gone into the European Championships with two Superseries titles this season under their belt, but the Russians took heart from home support and overturned a 16-18 deficit to pocket the first game. The top seeds rebounded in the second, holding a lead all through, but the third again saw fortunes fluctuate wildly. The match ended with Ivanov again firing a big smash which Boe was unable to control, leading to a delirious Sozonov (BWF home page) jumping into the arms of his coaches. The narrow 21-19 18-21 21-18 victory will see the Russians face another Danish pair, Mads Conrad-Petersen/Mads Pieler Kolding, in the final.

The fourth-seeded Danes were involved in a three-game match too, against England’s Chris Adcock/Andrew Ellis. However, after the first two games were split, the English pair was unable to mount a tough challenge in the decider and went down 21-16 19-21 21-8.

Apart from the loss of Boe/Mogensen, the day couldn’t have gone better for Denmark. The Danes won all their other matches and will contest all five finals, having assured themselves of two titles already: the Mixed Doubles and Women’s Doubles.

World No.3 Jan O Jorgensen (above) held off his younger compatriot Viktor Axelsen in surprisingly easy fashion in their “I was a bit surprised how I controlled the match against Viktor today but I prepared well and was mentally very strong but there is still a lot of work to do to win a medal as Rajiv Ouseph has been playing exceptionally well this week,” Jorgensen told BadmintonEurope.com.

Danish teen Anna Thea Madsen (right) justified her status as a prospect to watch out for, as she dismissed Turkey’s Ozge Bayrak 21-10 21-14 in just 30 minutes. She will have a far greater problem in the final, for facing her would be Carolina Marin. The top-seeded Spaniard destroyed the resistance of German Karin Schnaase 21-12 21-9.

* There were no surprises in Women’s Doubles and Mixed Doubles. Top seeds Christinna Pedersen/Kamilla Rytter Juhl were too strong for the Scottish-Bulgarian pair of Imogen Bankier/Petya Nedelcheva, 12-21 21-13 21-7 in Women’s Doubles, while their compatriots Line Damkjaer Kruse/Marie Roepke outplayed Dutch pair Eefje Muskens/Selena Piek 22-20 21-11. * Pedersen will be on the other side of the net from Kamilla Rytter Juhl in the Mixed Doubles final. Top seeds Joachim Fischer Nielsen and Pedersen were barely tested by Dutch pair Jorrit De Ruiter/Samantha Barning (above) 21-12 21-8, while Mads Pieler Kolding and Rytter Juhl outplayed compatriots Anders Kristiansen/Julie Houmann 21-14 21-17.