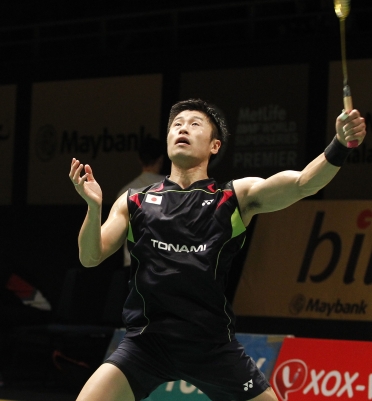 Sho Sasaki reached his first final in many months as he made the title round of the Asian Badminton Championships 2014 at Gimcheon Indoor Stadium yesterday. The Japanese left-hander (BWF home page), once ranked sixth but No.23 now, has not reached a major final in over two years. Sasaki thwarted the giant-killing run of Korea’s Hwang Jong Soo in straight games in their Men’s Singles semi-final, 21-13 21-15 in 55 minutes.

However, the final is likely to be far more challenging as he will face two-time champion Lin Dan. The world and Olympic champion from China continued his remarkable run after returning from a self-imposed layoff, dismissing compatriot Liu Kai 21-14 21-13. Sasaki’s record will weigh against him as he has won only one of their ten matches, at the Indonesia Open in 2011. Lin Dan’s semi-final victory was his ninth straight-games victory on the trot.

In Women’s Singles, Lin’s compatriot Wang Shixian moved to within one victory of her first Asian Championships title. The All England champion was severely tested by PV Sindhu but eventually her resolve broke the spirit of her Indian challenger. Having lost the first game, Wang was in a precarious state in the second but after she edged through, the third game was hers for the taking: 15-21 22-20 21-12.

She will be wary of Korea’s Sung Ji Hyun (above), who overcame stiff first-game resistance from Japan’s Sayaka Takahashi in the other semi-final: 23-21 21-13. Sung has beaten Wang thrice in eight contests, but Wang has got the better of Sung in their last two encounters. Korea’s Shin Baek Choel (above) gave himself a shot at two titles. He and Jang Ye Na were comfortable winners over former champions Sudket Prapakamol/Saralee Thoungthonkam of Thailand in Mixed Doubles, 21-11 21-12. Shin then returned for his Men’s Doubles match with Yoo Yeon Seong. The Koreans worked their way out of a sticky situation in the second game, prevailing over Maneepong Jongjit/Nipitphon Puangpuapech of Thailand, 21-17 22-20.

* Korea will have representatives in four events in today’s finals. Women’s Doubles second seeds Kim Ha Na/Jung Kyung Eun won the most exciting contest of the day: an 83-minute battle over China’s Zhong Qianxin/Huan Xia, 21-23 21-15 21-16. In the other semi-final, China’s Luo Ying/Luo Yu had it easy against India’s Jwala Gutta/Ashwini Ponnappa, 21-12 21-7. * Mixed Doubles third seeds Lee Chun Hei/Chau Hoi Wah (above) will take on Shin/Jang in the final. The Hong Kong pair were too strong for China’s Zhang Wen/Huan Xia, 21-13 21-15.

* Shin and Yoo will face China’s Li Junhui/Liu Yuchen in the Men’s Doubles final. The latter took just 24 minutes to get past Shi Longfei/Chen Zhuofu in an all-China semi-final, 21-9 21-14.