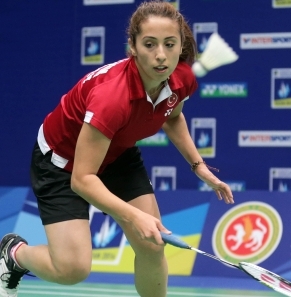 Ozge Bayrak ensured Turkey’s presence in the semi-finals of the 2014 Intersport European Championships with a surprisingly easy victory over Kristina Gavnholt. Gavnholt, the fifth seed from Czech Republic, was the more experienced of the two, but Bayrak (BWF home page) led from the start and never allowed her rival to get close in their Women’s Singles quarter-final match. The 21-10 21-15 victory was achieved in 30 minutes and followed Bayrak’s upset of second-seeded Scot Kirsty Gilmour in the third round. The No.122-ranked Bayrak had survived a close three-game opener against Alesia Zaitsava of Belarus.

Women’s Singles will see a new champion this year, and the quarter-finals today reflected the generational shift. Denmark teenager Anna Thea Madsen booked her semi-final opposite Bayrak with a 21-9 21-12 decimation of Russia’s Olga Golovanova. The Dane has in fact not taken over 31 minutes in any of her four matches on the way to the semi-final, with her stiffest test coming in the second round through Austria’s Alexandra Mathis, whom she overcame 21-16 23-21.

The favourite for the title, Spain’s Carolina Marin, did not spend too much time on court as she overwhelmed Bulgaria’s Stefani Stoeva 21-10 21-15. The top seed will face Germany’s Karin Schnaase, the oldest of the four semi-finalists at 28. Schnaase, who shares her Valentine’s Day birthday with Ozge Bayrak, used her experience to thwart Denmark’s rising talent Line Kjaersfeldt 21-18 21-15.

The top guns in Men’s Singles – Denmark’s Jan O Jorgensen and Viktor Axelsen – moved into the semi-finals in contrasting fashion. Jorgensen overcame mid-match blues against Frenchman Brice Leverdez to post a 21-14 19-21 21-12 victory, while Axelsen was more emphatic against Russia’s Vladimir Malkov, 21-9 21-18. Top seed Jorgensen was nearly shown the door in his third round by Germany’s Dieter Domke, with three match points staring him in the face, but the doughty Dane scrambled home eventually, 12-21 21-14 23-21.

Fifth seed Rajiv Ouseph (above) of England and Russia’s Vladimir Ivanov face off in the other semi-final. While Ouseph held off Denmark’s Hans-Kristian Vittinghus in three games, Ivanov had it relatively easy over veteran Dutchman Eric Pang, 21-15 21-9.

* Dutch pair Eefje Muskens/Selena Piek (above) edged past Bulgaria’s Stefani and Gabriela Stoeva in a tense first game before cruising to a 25-23 21-15 victory in Women’s Doubles. They will take on third seeds Line Damkjaer Kruse/Marie Roepke of Denmark. * Ivanov also made it to the last-four of Men’s Doubles with Ivan Sozonov. The third seeds (above) from Russia were taken the distance by England’s Chris Langridge/Peter Mills, 21-14 16-21 21-18, and face top seeds Mathias Boe/Carsten Mogensen of Denmark.